Wow…what a busy couple of weeks! Spring Break has sprung and so has the fishing in every body of water that I fish in my area.

Lets start off with the World Famous Mosquito Lagoon. The Redfish have been in good numbers all throughout the Lagoon along with some schools of Black Drum and big Sea Trout roaming the flats. These fish are working flats with deeper water near by and can be seen tailing in some really skinny bars.

Panos and his girlfriend Bailey from New York City joined me last week to target Redfish with the fly rod and spinning tackle. Panos whacked a couple on fly, while Bailey slayed them with the spin rod(which this was her first time flats fishing in her life). They both had a great time being one with nature, catching fish and sharing great memories! 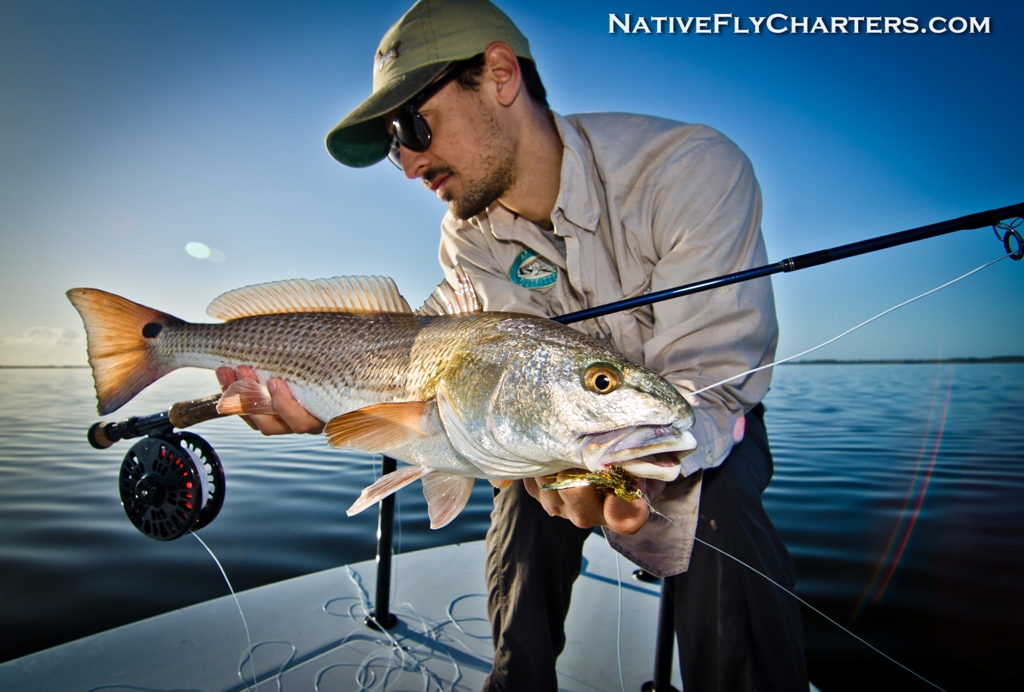 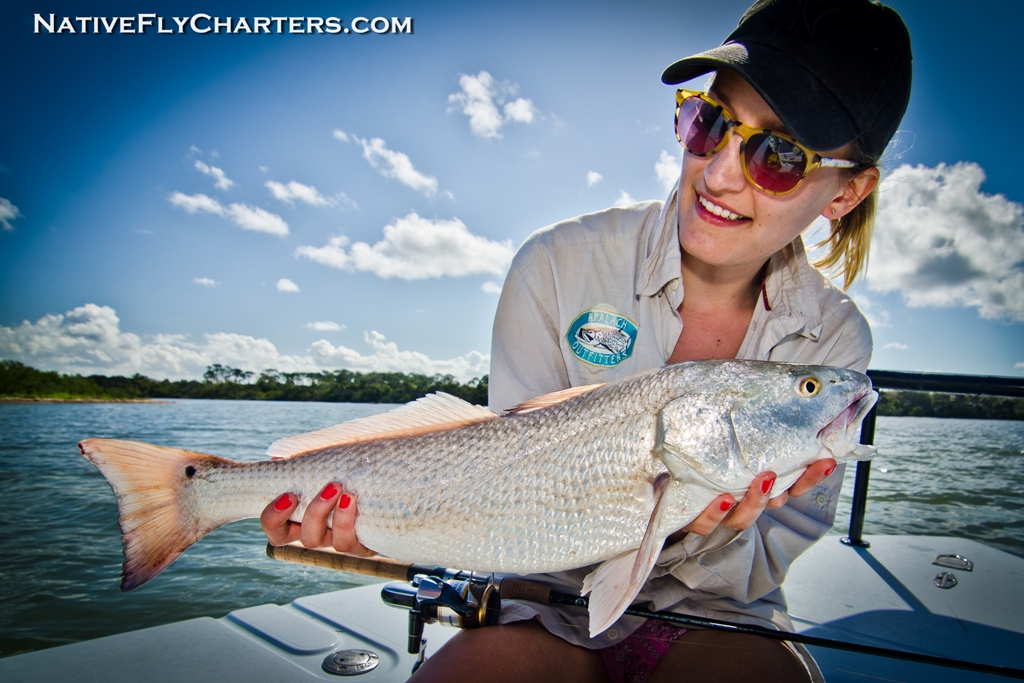 Panos even found a nice Flounder while jigging a deeper sand edge. 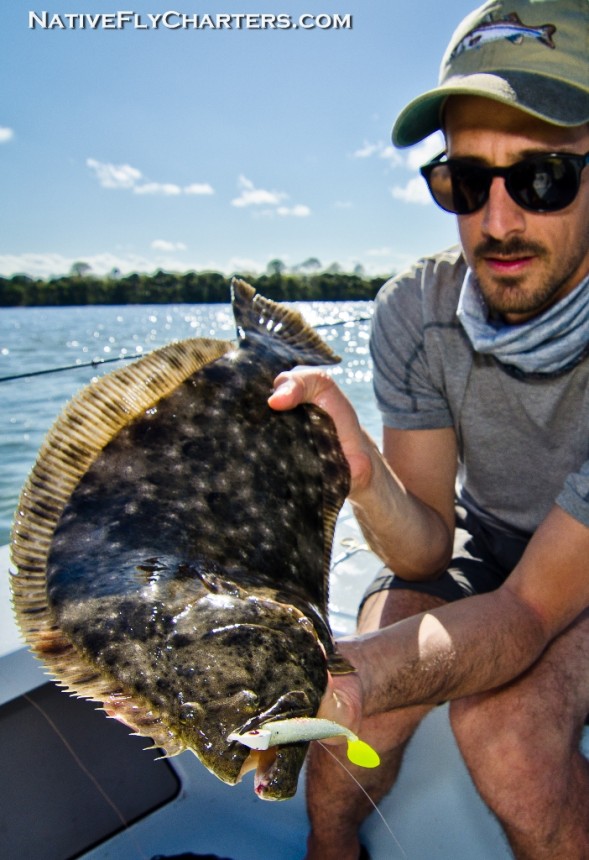 A couple days before this trip, Cassidy and Pat Flannigan were also pulling in some good fish in the Mosquito Lagoon with me. Cassidy and his dad Pat had a friendly wager on who can catch the most fish…and of course Cass did! 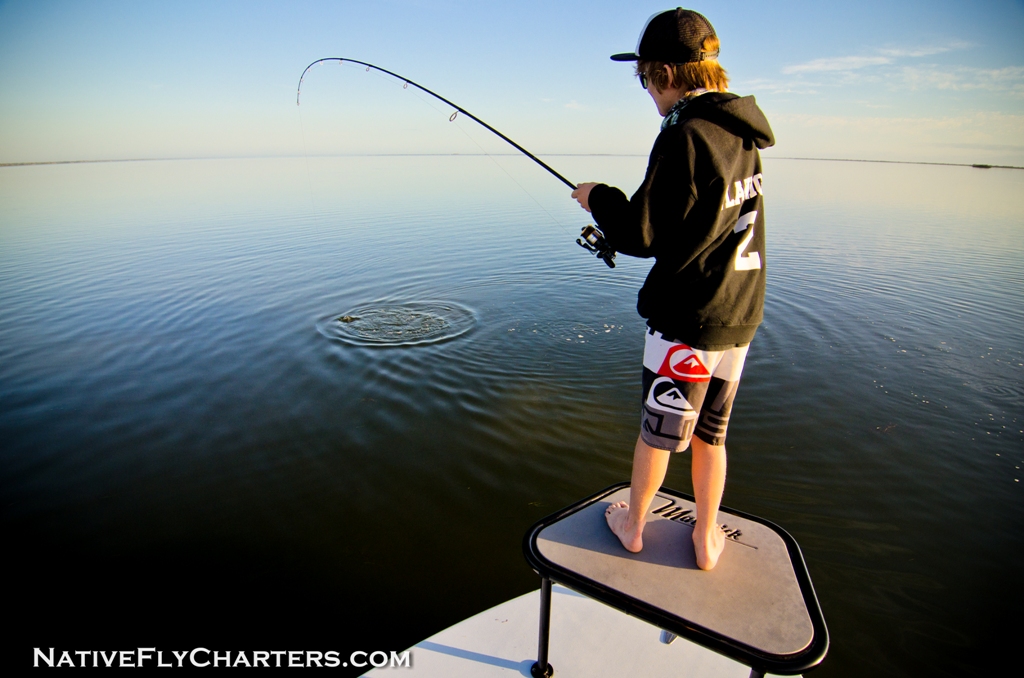 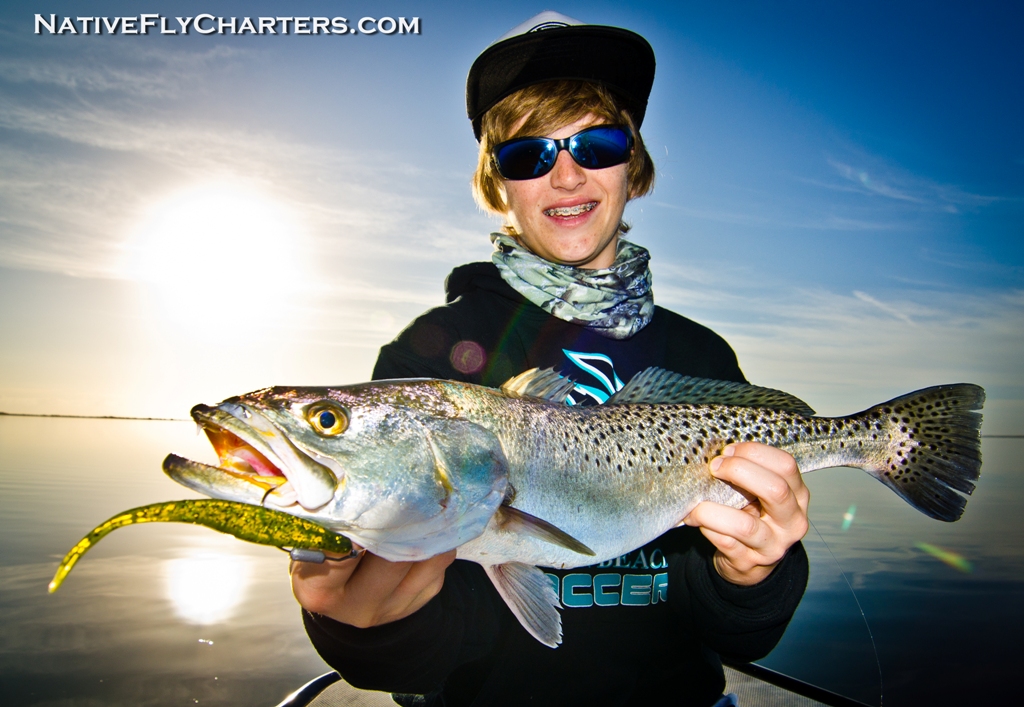 In the Banana River, the bigger Redfish can be found schooled up in large numbers along with slot sized fish mixed in. The Sea Trout bite remains hot as well!

Mike, Phil and his son Kyle originally had a trip with me to target Cobia out of Port Canaveral, but plans changed when the seas and winds kicked up too high to get the 22′ Pathfinder Bay boat out there so we opted to fish the river for some big Redfish. Mike, Phil and Kyle all beat there record of biggest Redfish this day! 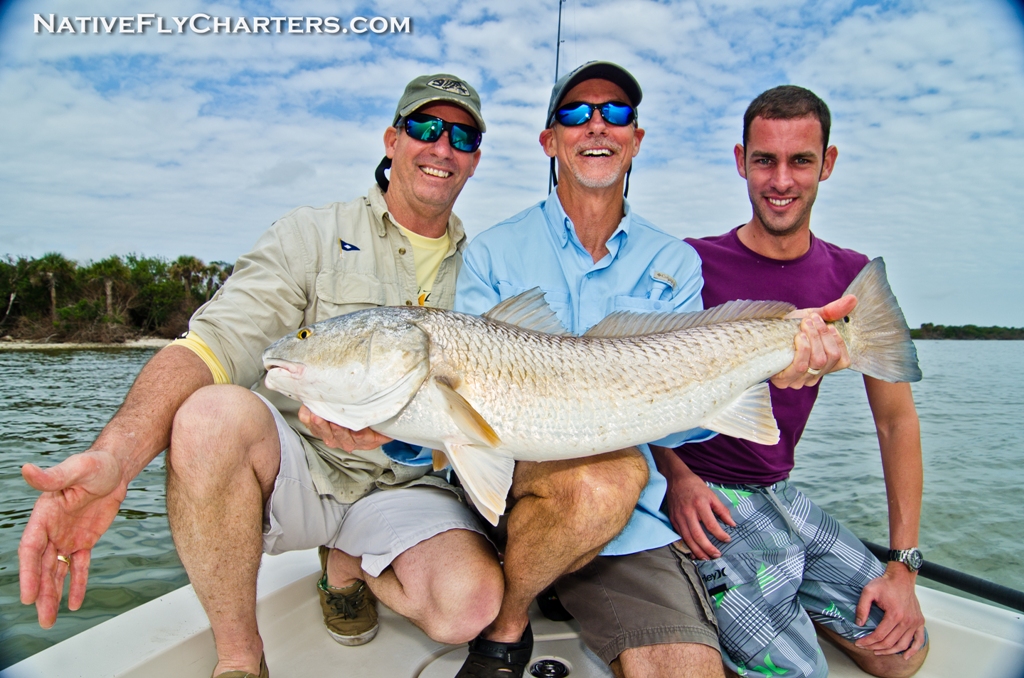 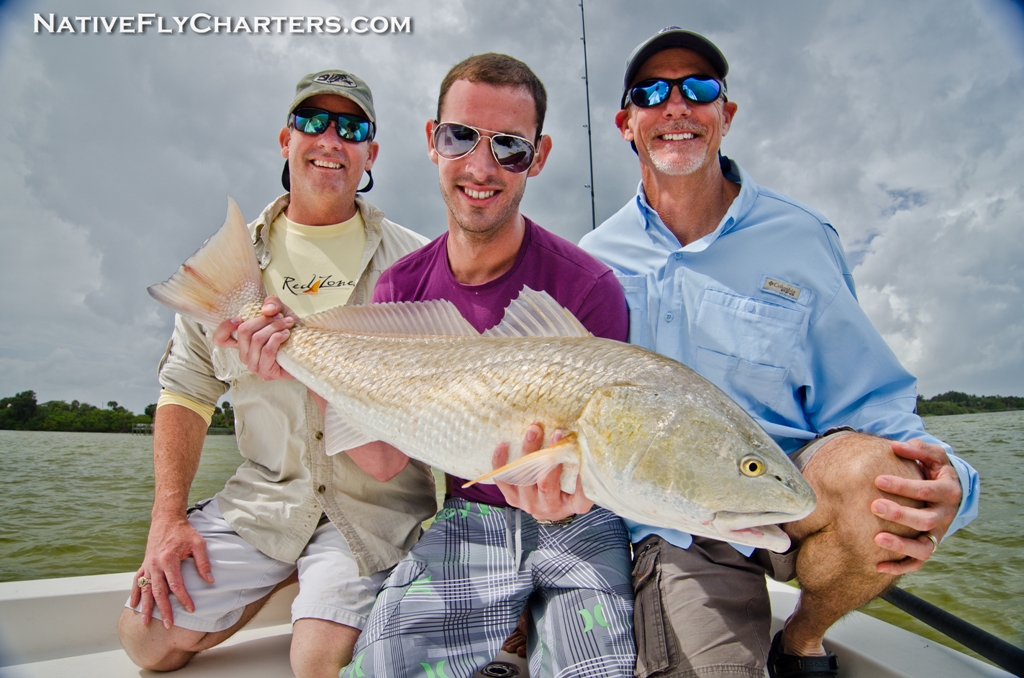 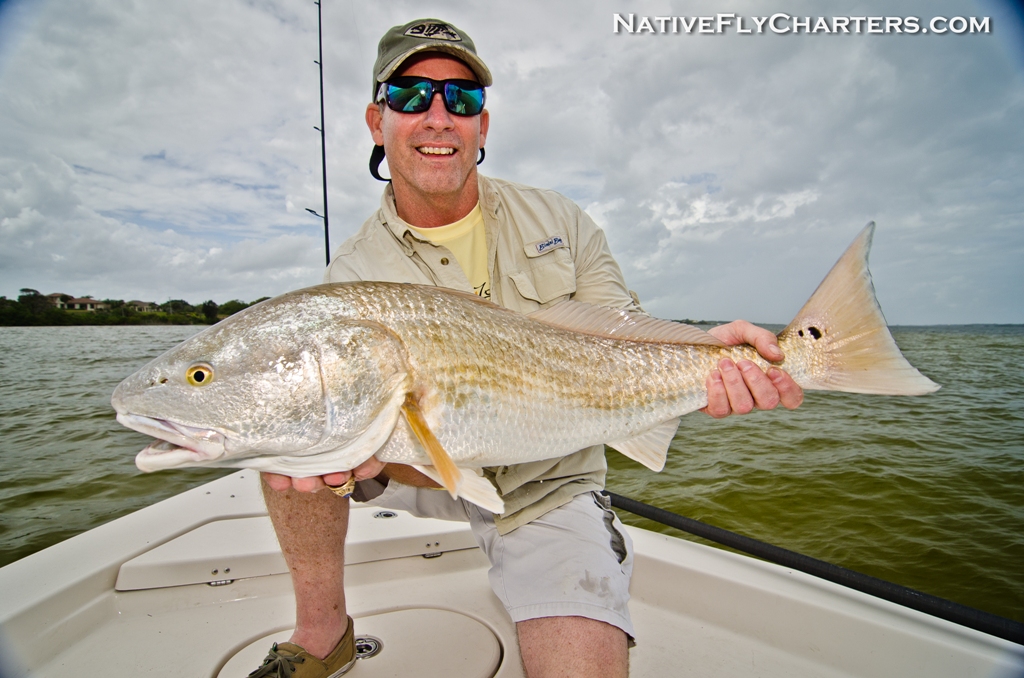 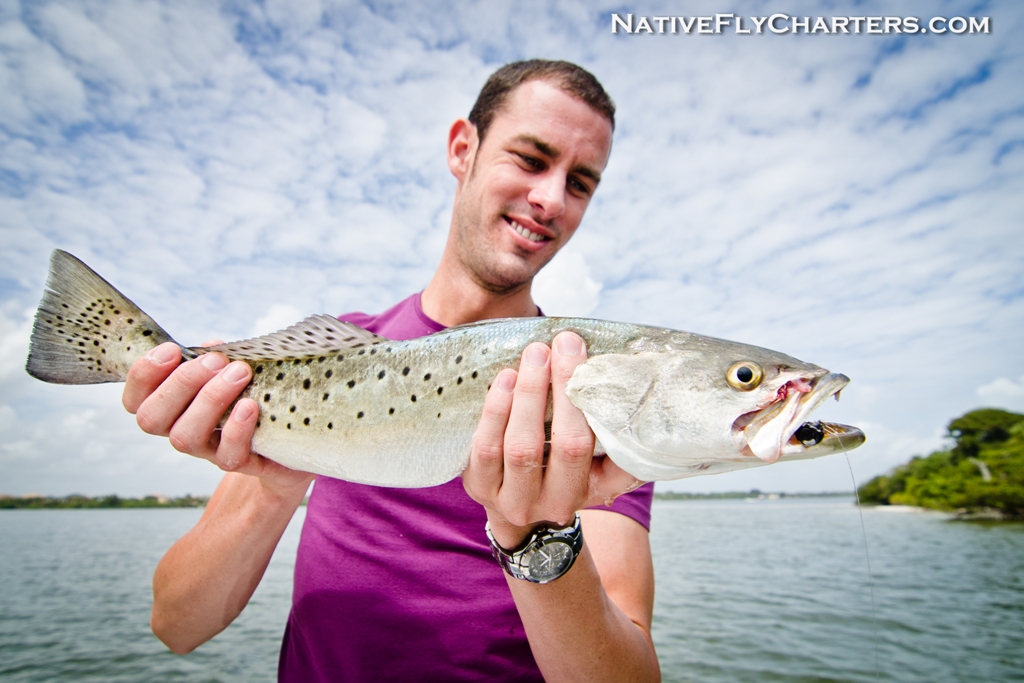 The best Trout bite has been in the Indian River. I’ve never seen the bite this good in a long time. Blind casting around mullet schools using topwater lures, soft plastics, twitch baits, or anything you have in you tackle box will catch these fish. The trout average around 3 – 4lbs with some bigger ones mixed in. There are also some Redfish hanging around the same areas ready to eat a lure.

Jeff and Jeremy from Iowa were having a great time catching both Redfish and Trout using soft plastics on a weedless hook. 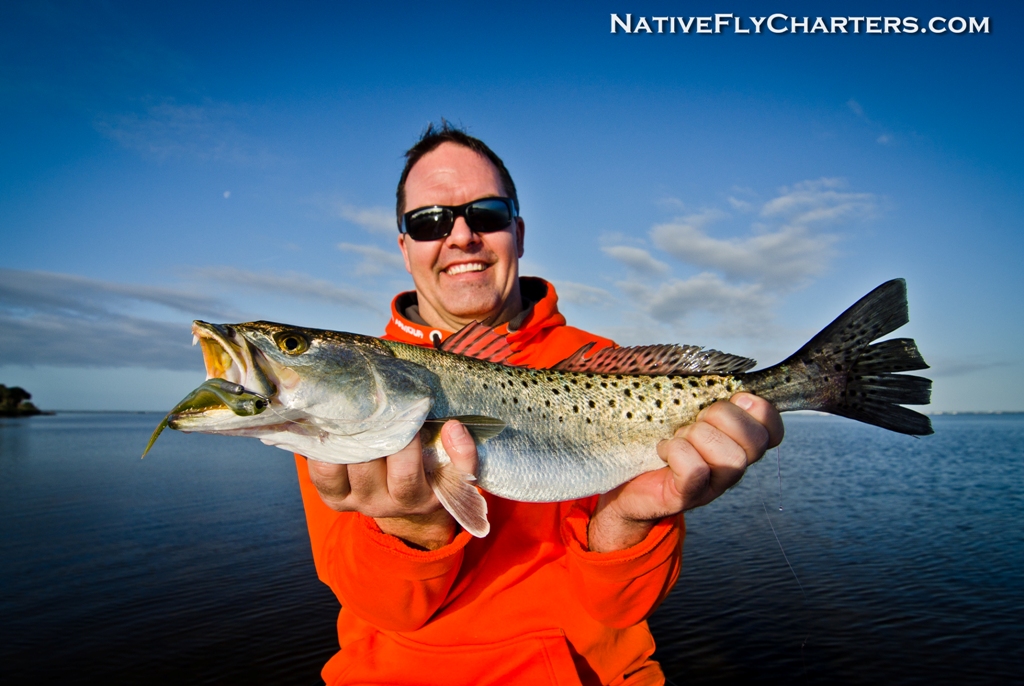 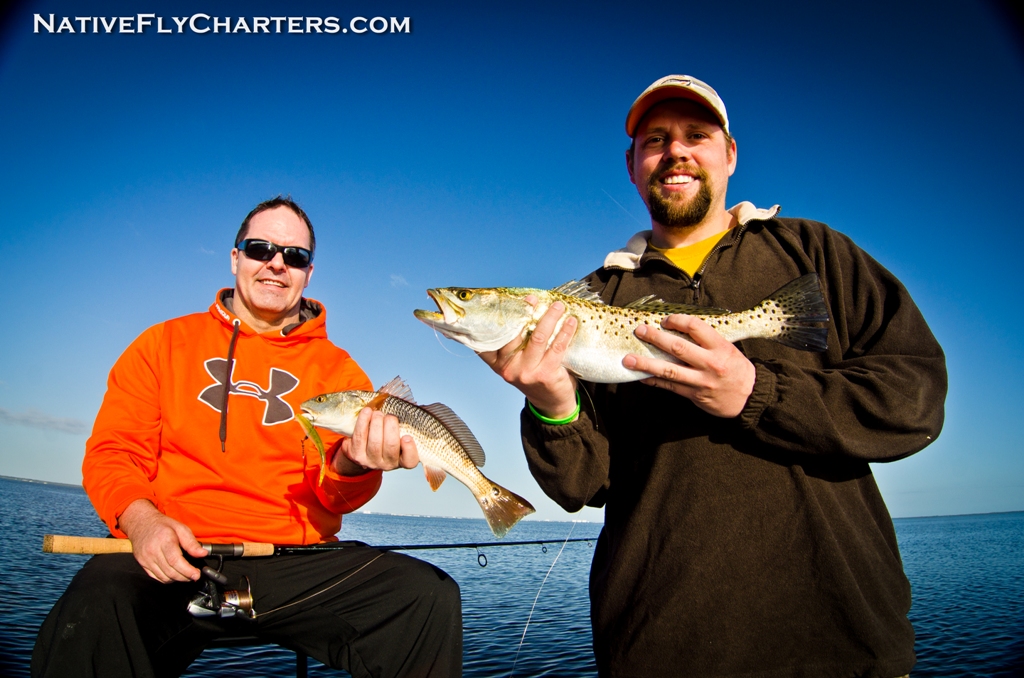 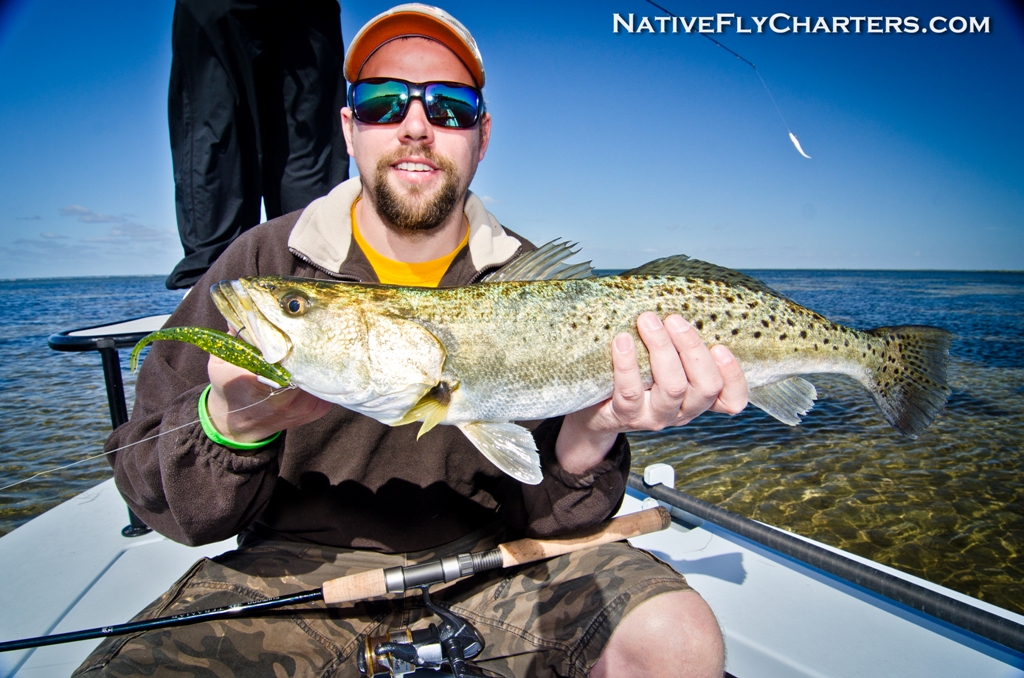 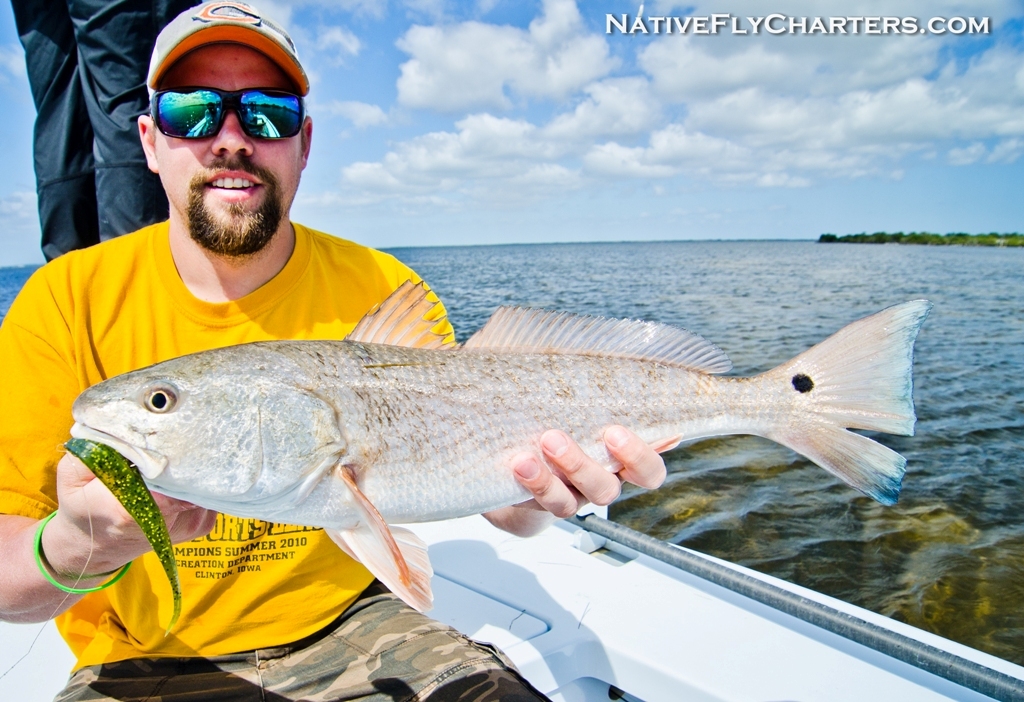 When conditions are good enough to head out of the Port into the Atlantic Ocean, I would take advantage of the opportunity and head out for some Cobia. Me, my brother Trung, Brad and his son Fischer fished a Cobia Tournament last Saturday. We did not win the tourney but Trung got to catch some dinner and 12 year old Fischer caught the biggest fish in his life! 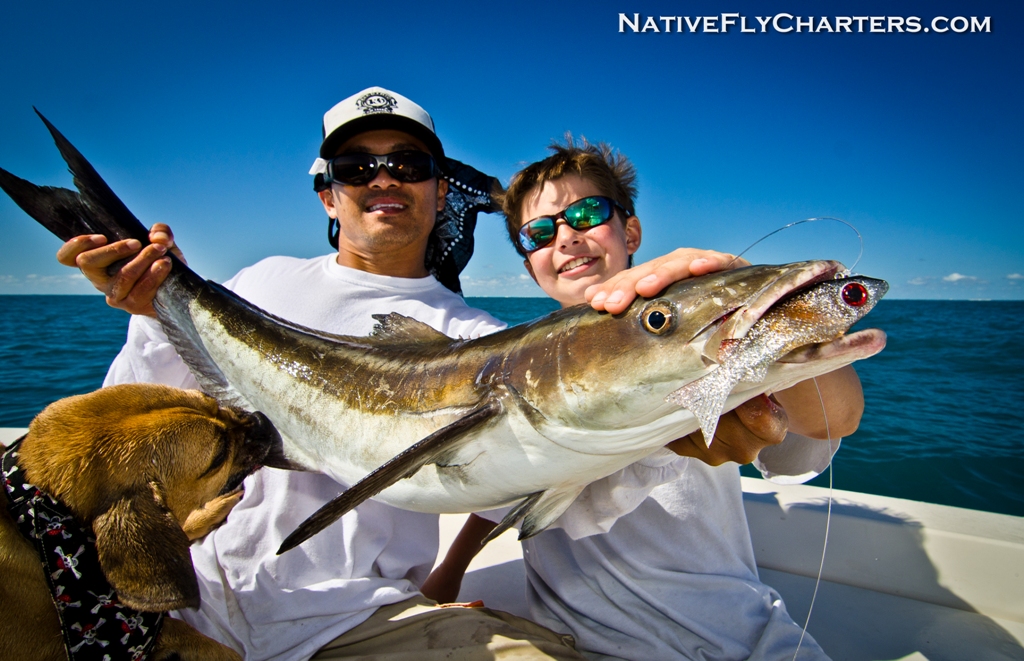 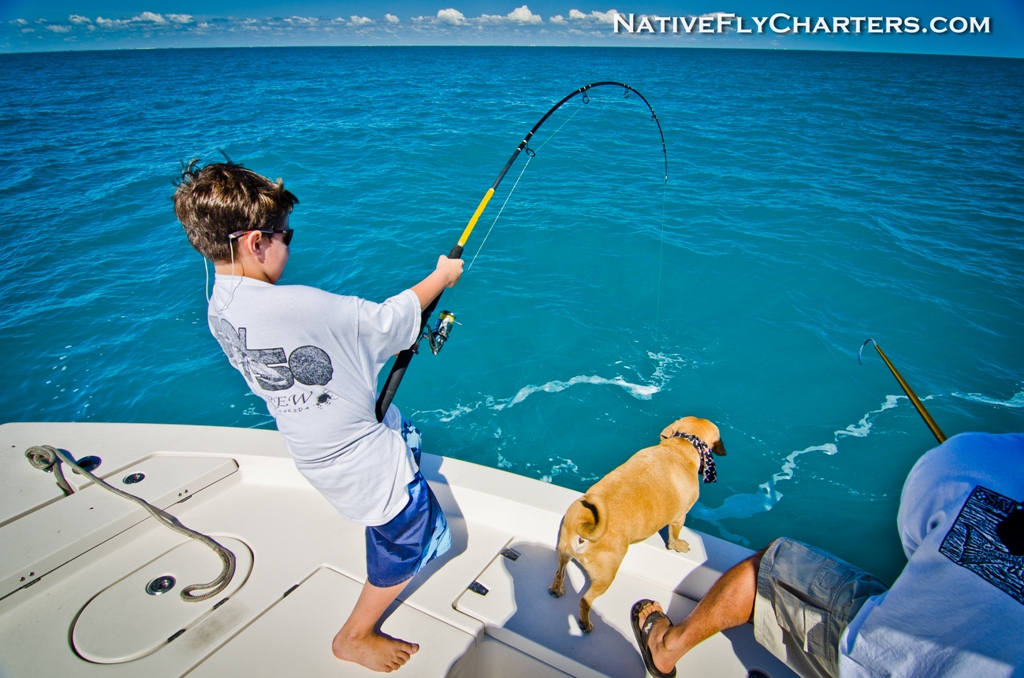 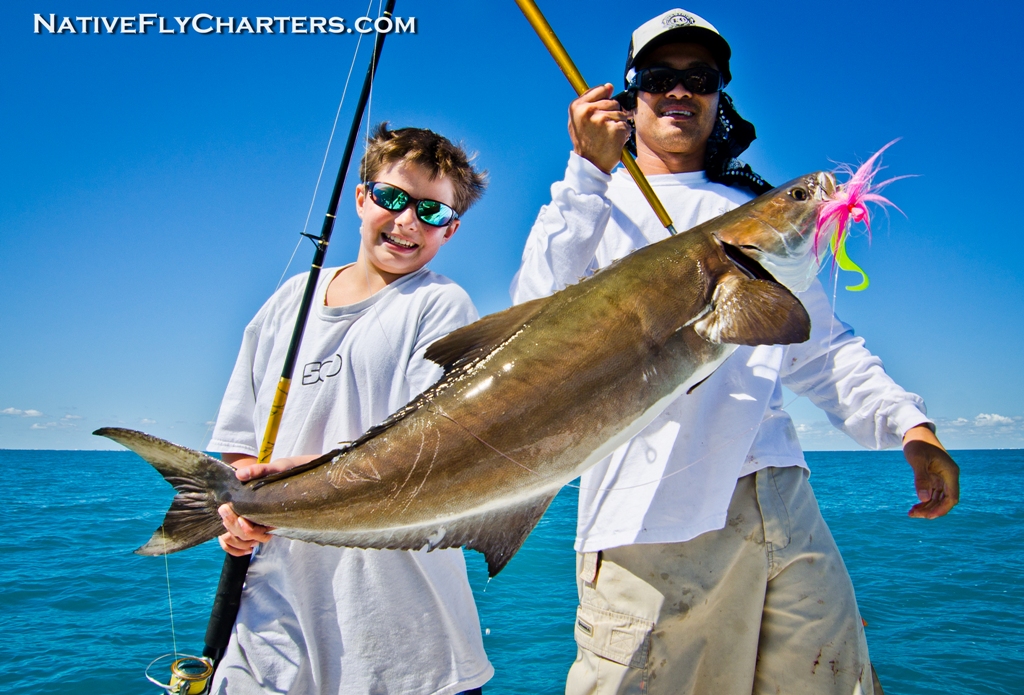 The next day Panos from NYC decided to try and get some Cobia with the fly rod. We had 3 shots all day having 2 of the fish eat and one being lost just at the boat after a long battle. Last year Panos boated 7 Cobia over 25lbs fishing with me, he came down a little too early this year for the run but he will be back when it starts to peak! He did get a few shots at Triple Tail and got a little one in the boat with a small shrimp pattern. 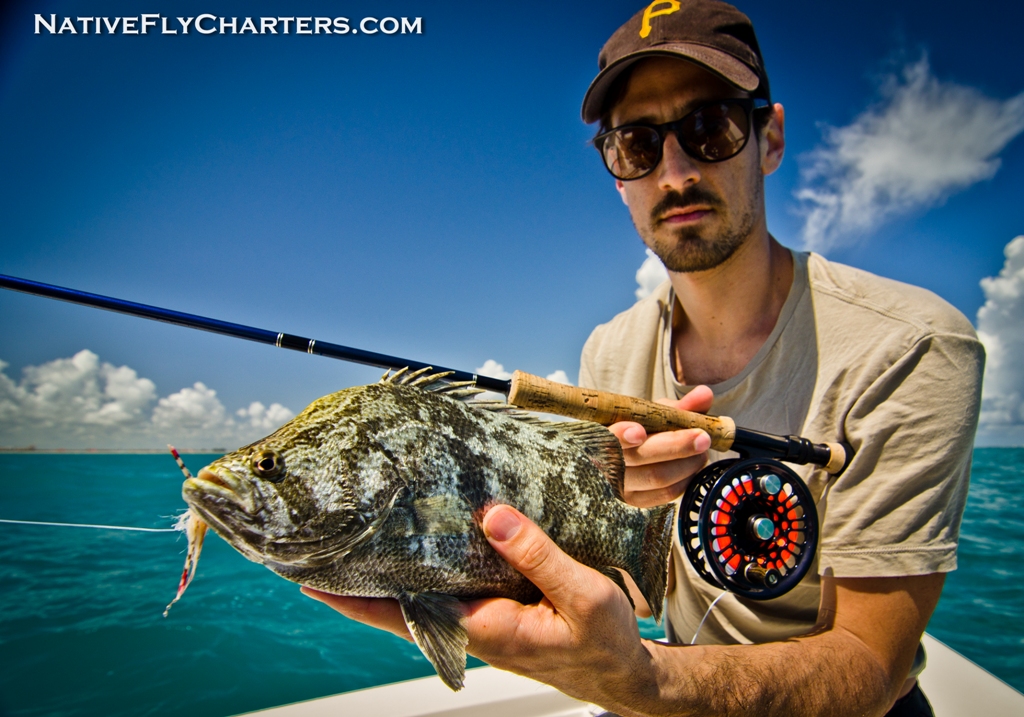 Thanks for reading and I’ll see you on the water! 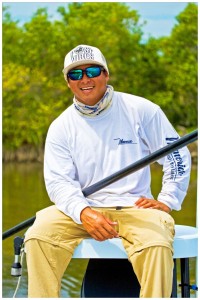