Greetings everyone! Welcome to Native Fly’s monthly blog/fishing report. This month has been very funky with weather. One day it’s 50 degrees for a high and the next is in the 80’s, add some howling winds blasting at 25mph during and after fronts and you have typical Florida Winters.

Some days I’ve been lucky to have great weather while on the water, and some days I have no choice but the get out and brave the winds looking for protected areas in order for customers to be able to cast a fly rod.

Finding fish has not been a problem in all 3 Lagoon systems(Banana River, Indian River, Mosquito Lagoon). North winds and cooler temps this month have cleaned up the water quite a bit making it top notch for sight fishing. I’ve been seeing a lot of Sea Trout ranging from 20″-30″+ in shallow water, a few schools of Redfish, and a good number of Black Drum. Although there are plenty of fish to be found, they can be extremely spooky and picky eaters. I’ve scaled down to 10lb test tippet at times and also scaled the size of the flies in order to present it to laid up fish without them taking off in the other direction at warp speed. Same goes to spin fishing, increase the length of your fluorocarbon leader, scale it down to 10-15lb test and use small lures in a natural color for better presentation in crystal clear water.

This has been a busy month for me with new and repeat customers. It’s always good to see repeats back on the skiff and see their progress in the sight fishing game.

Bud, who is one of my regulars from Georgia joined me on one of the colder days, fish didn’t seem to mind the cold air temps. 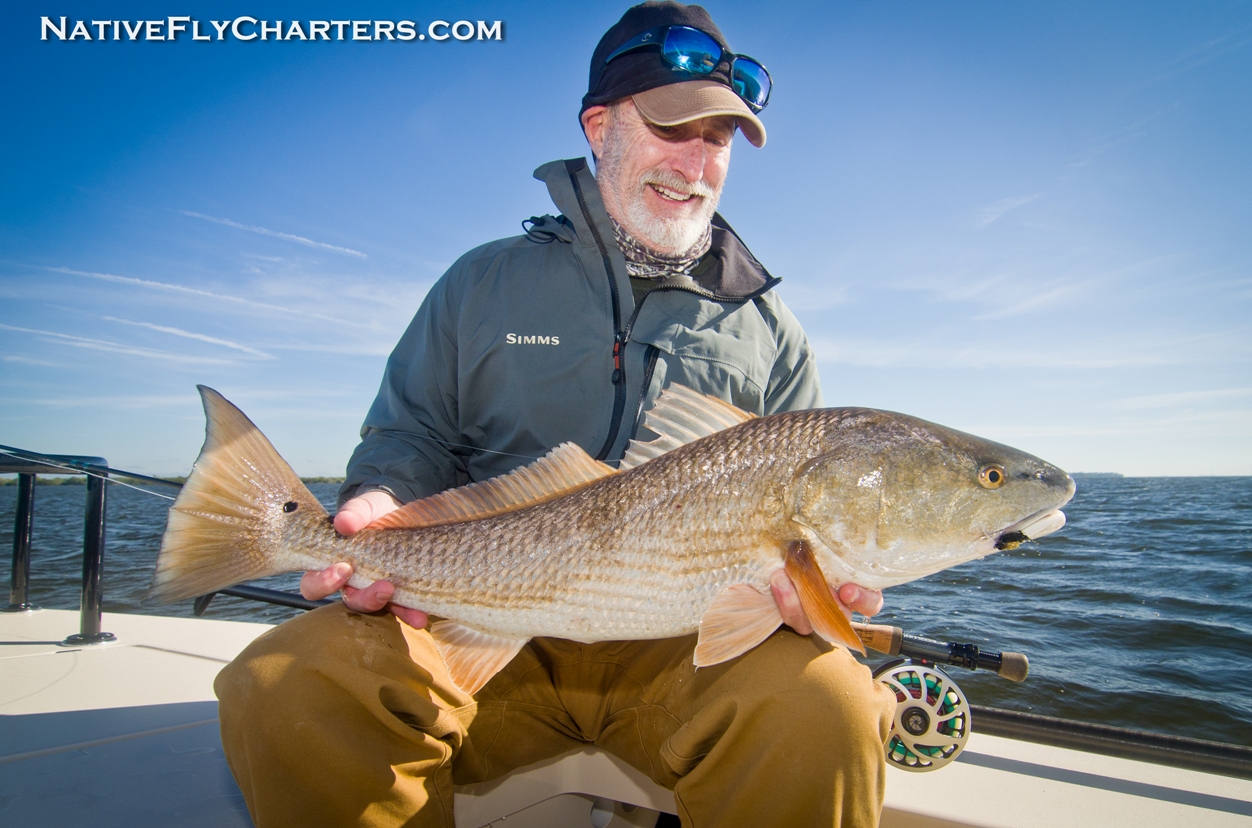 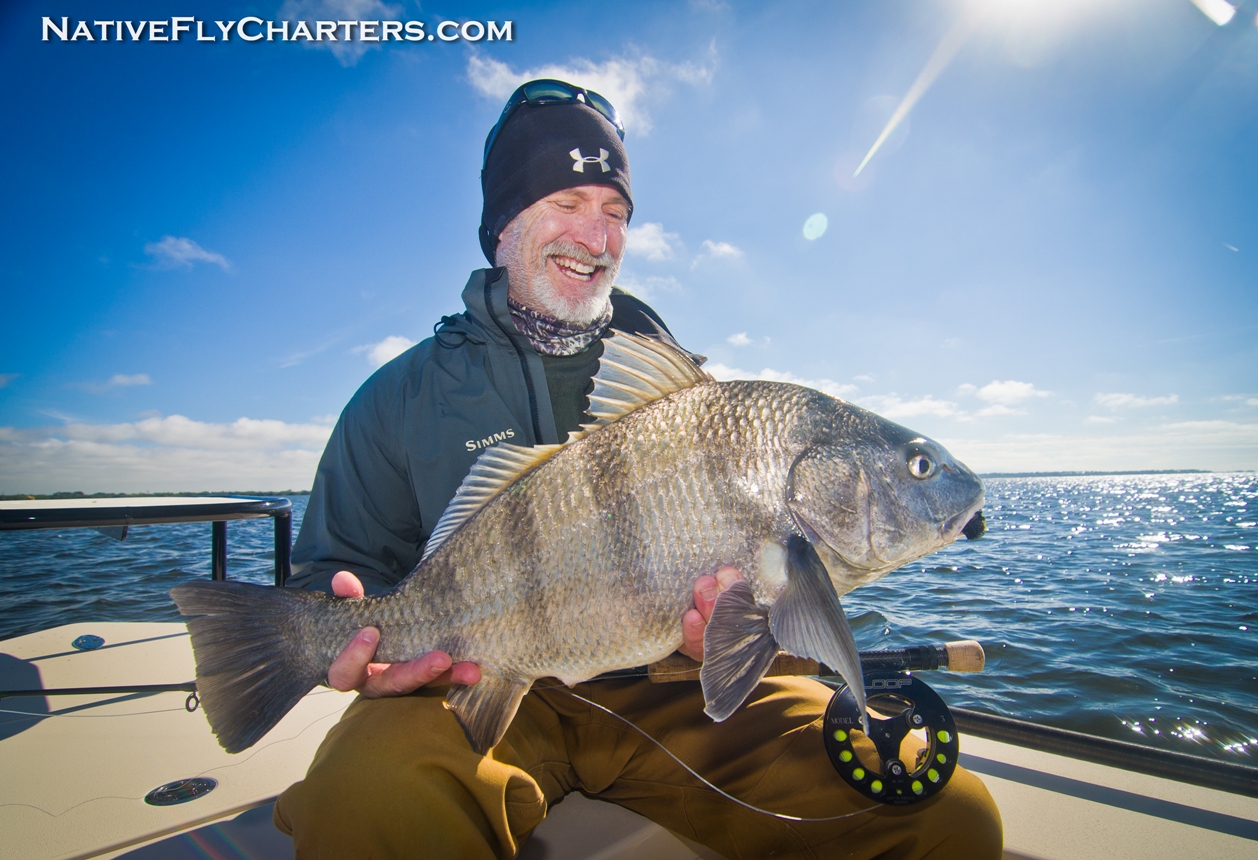 Chad from Ohio had a banner day with me catching 3 very nice sized Black Drum on fly along with a good Sea Trout. What’s cool about Chad is that he agreed to leave the Drum alone after catching 3. These fish were grouped up and happily tailing, we didn’t want to beat them up all day, instead we left them happy for my guys the next day. 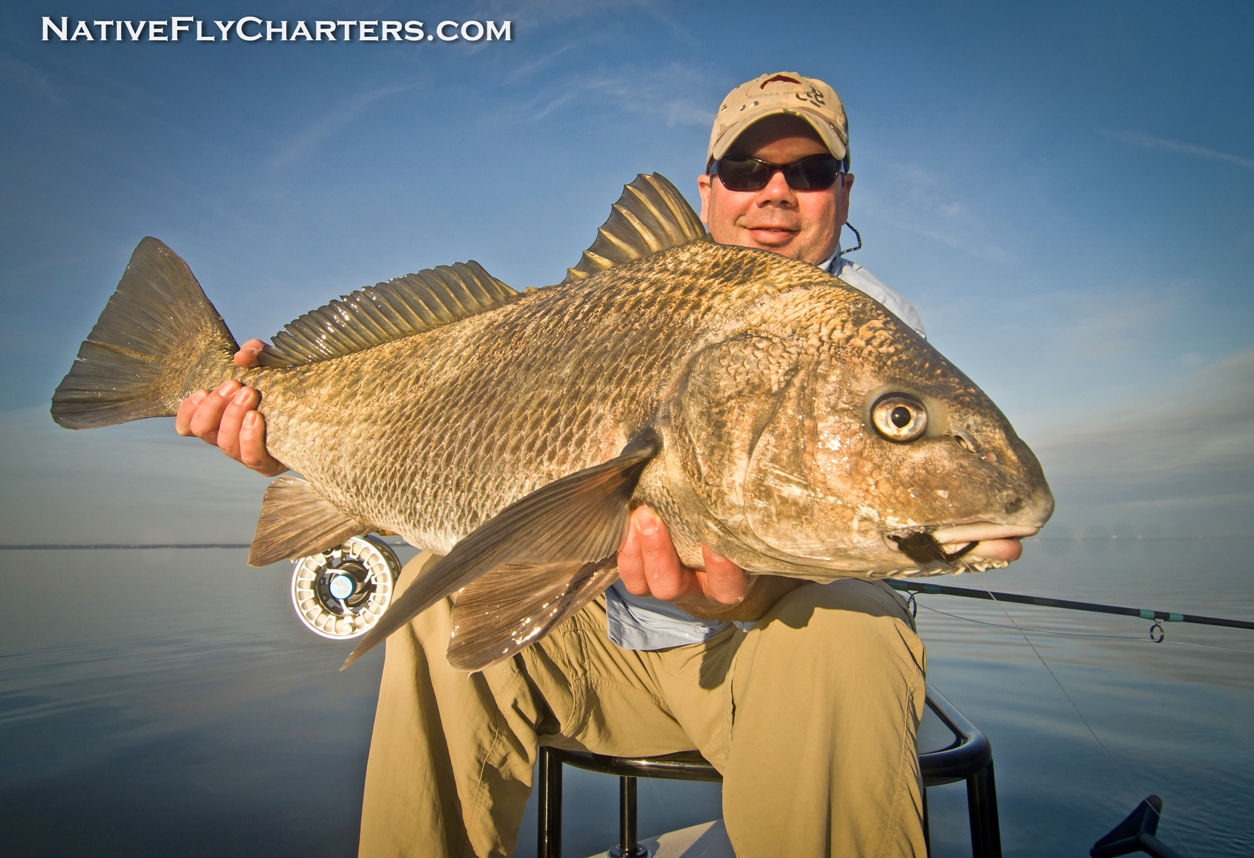 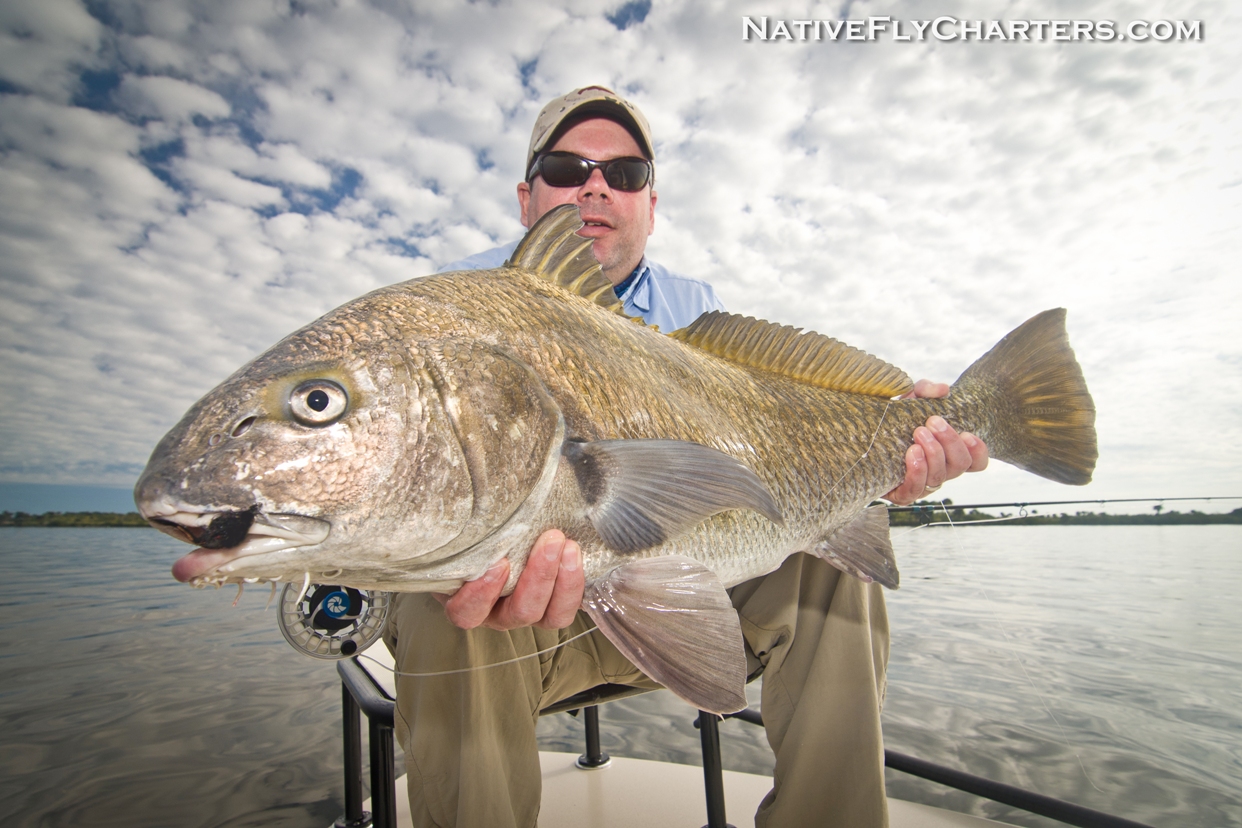 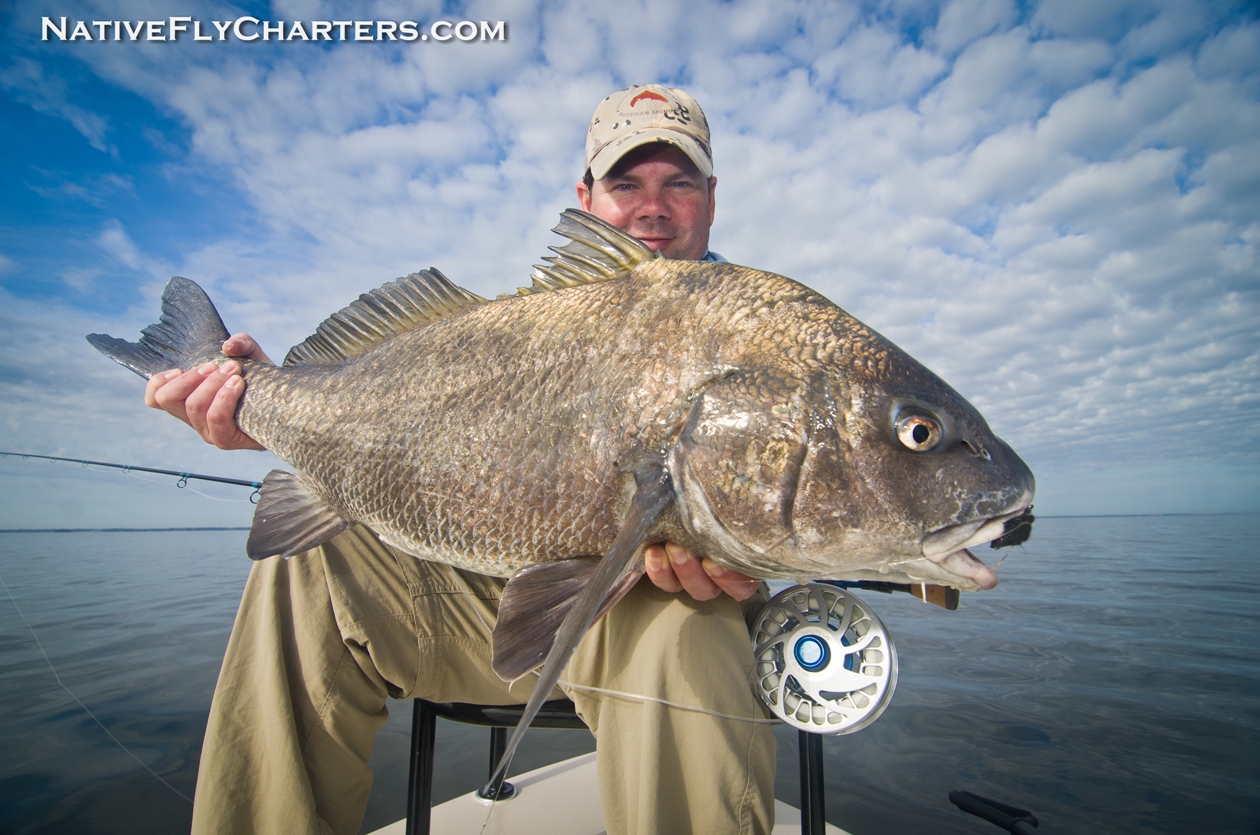 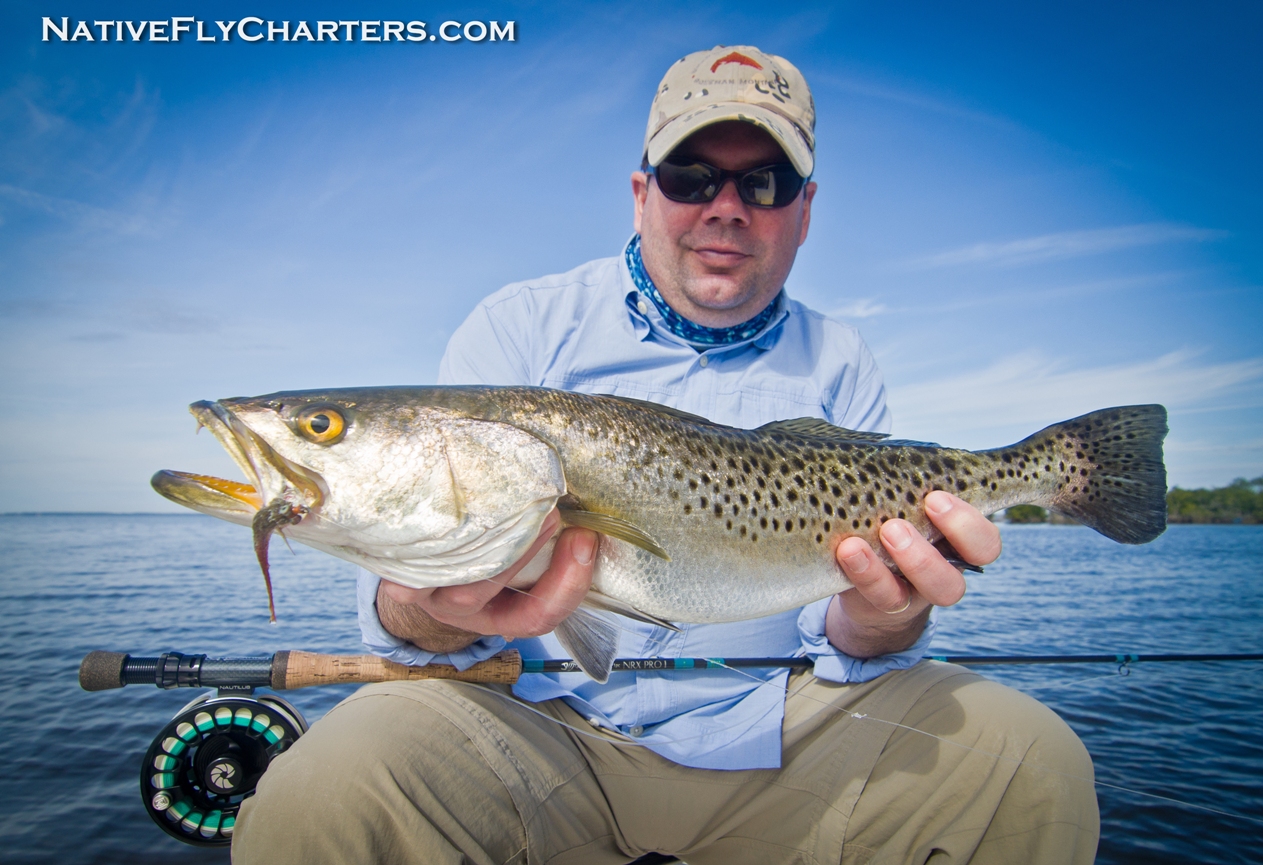 Since we left them alone the day before, the fish were still at the same spot still tailing away for Argentina angler Alejandro. We had enough time to catch 1 before the winds picked up big time and chased us off the water early. This was Alejandro’s largest fish on fly. 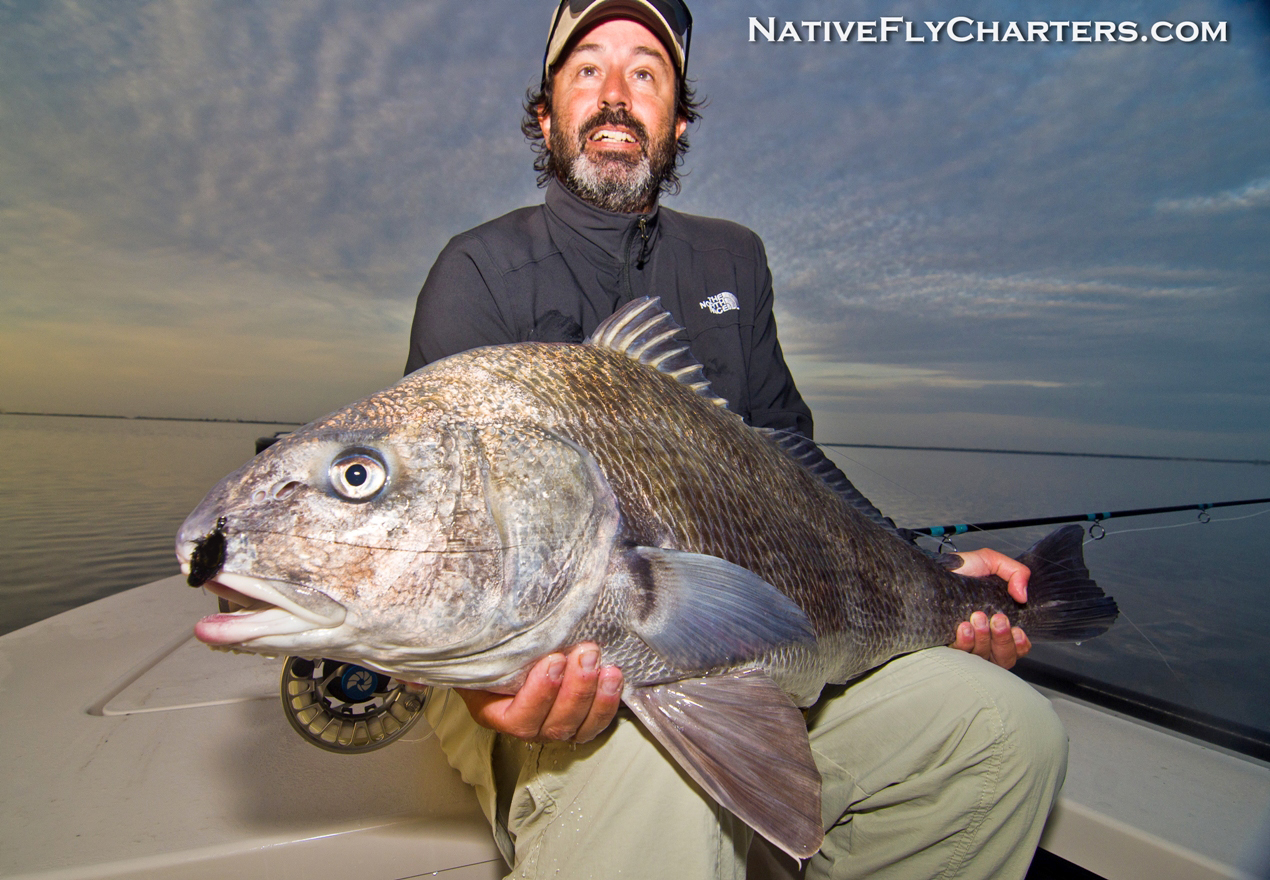 Paul from Indiana made it happen this day. Fish were very spooky, but one fell for the fly. 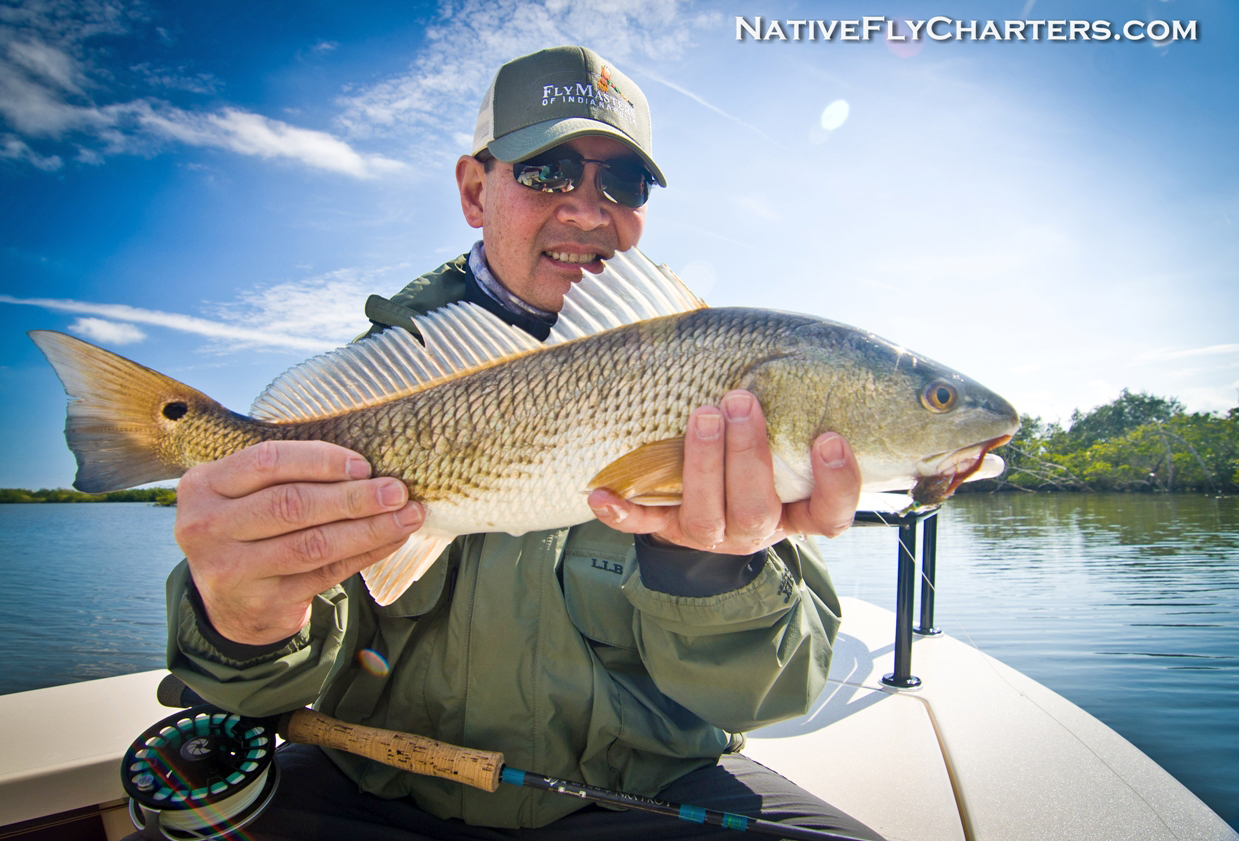 Nicole from Calgary, Canada had a pretty good day. Lots of happy fish in very clear water. Nicole is also a fishing guide up in the Bow River in Calgary. If you are ever up that way and looking to do some fly fishing, her site is: www.castawayfloattrips.com. 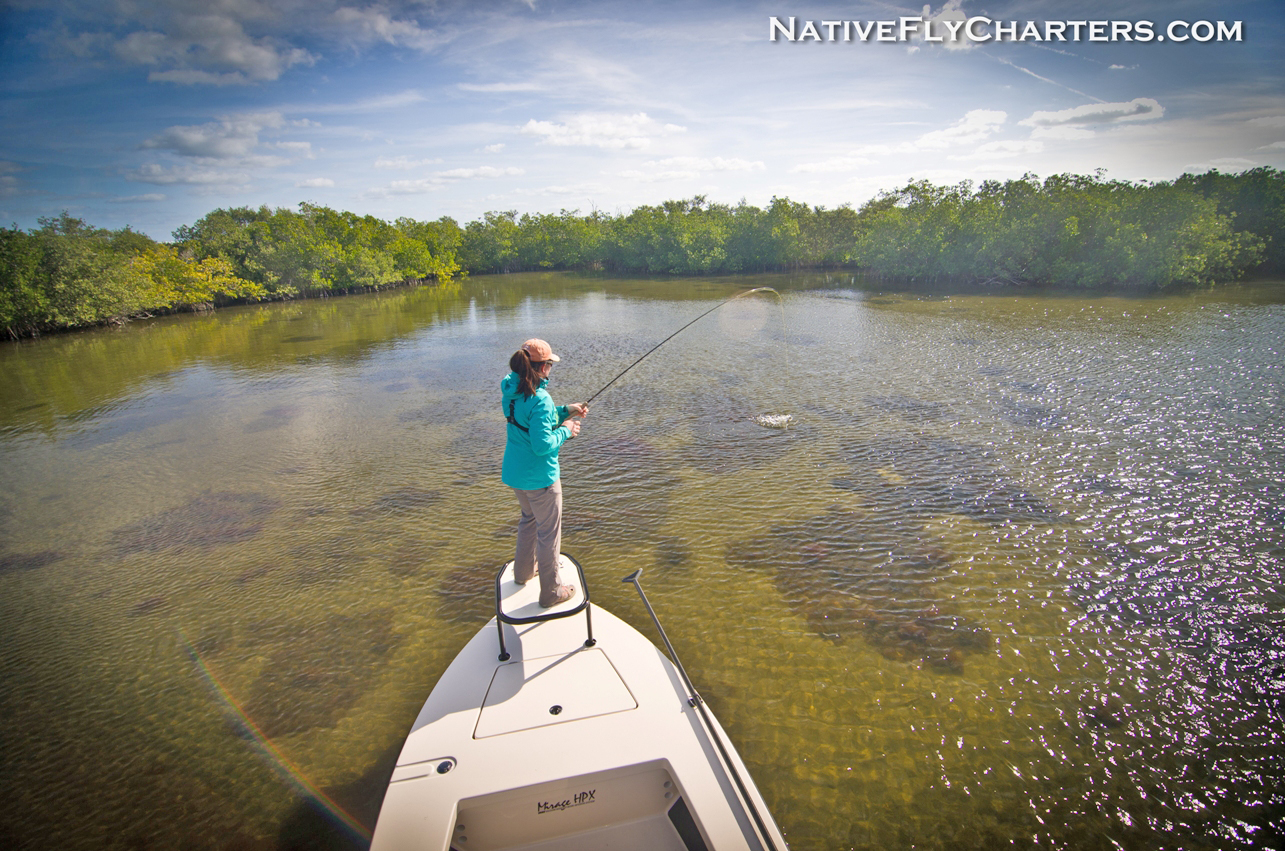 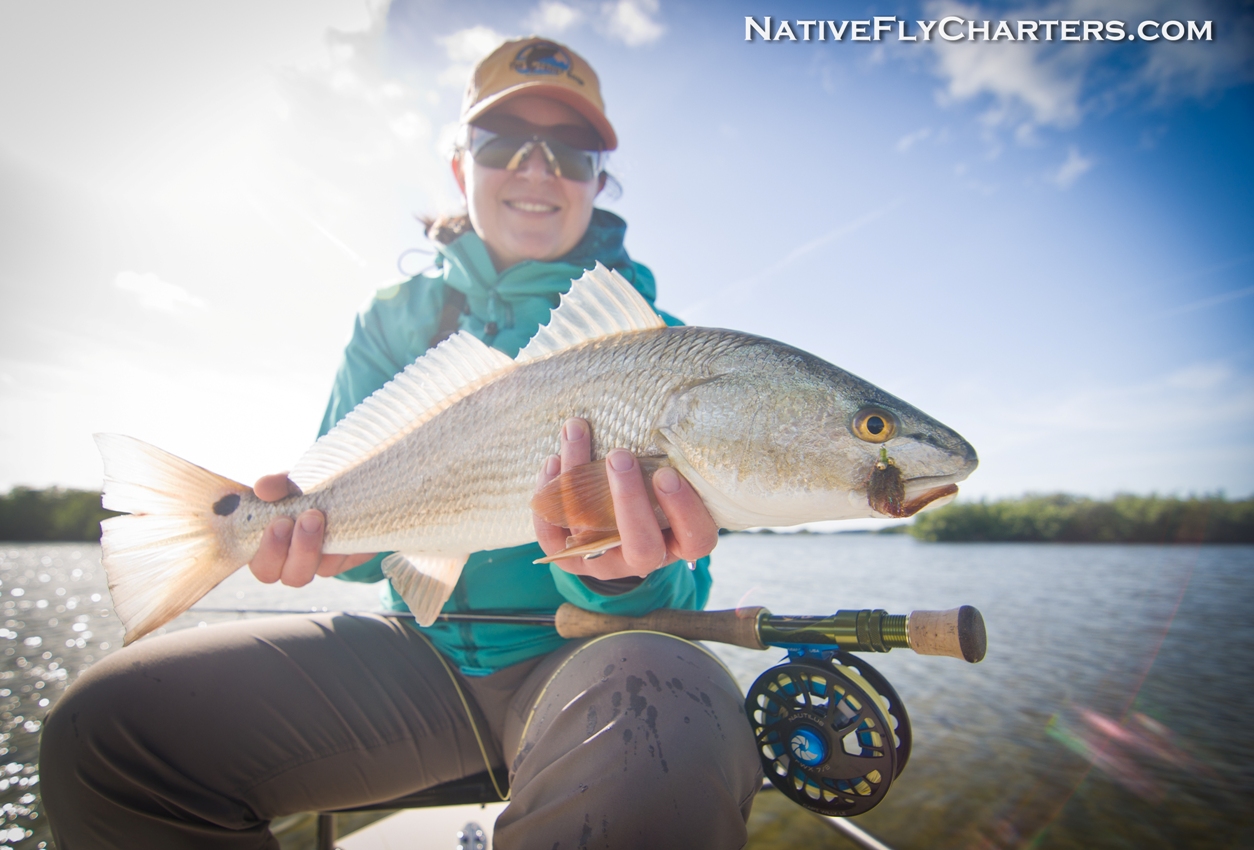 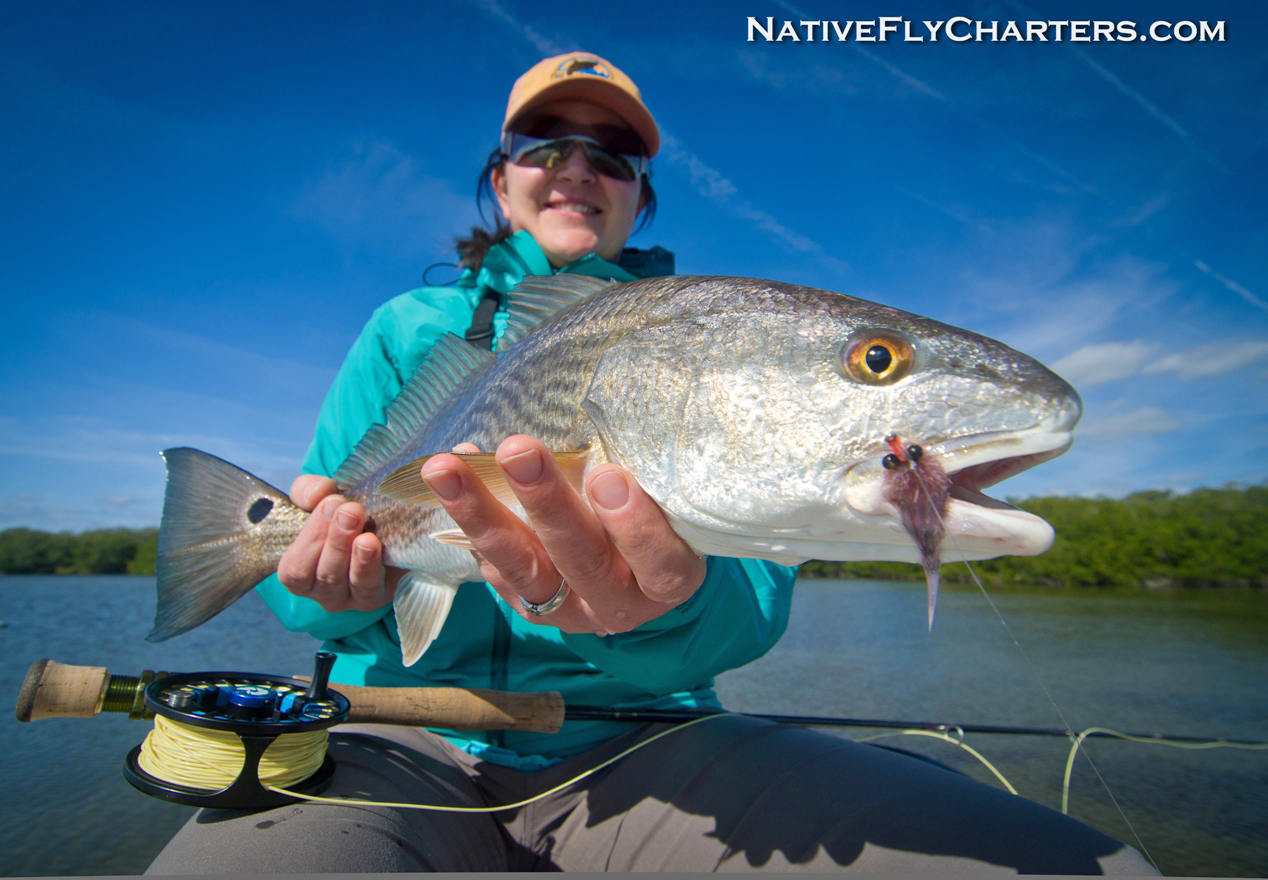 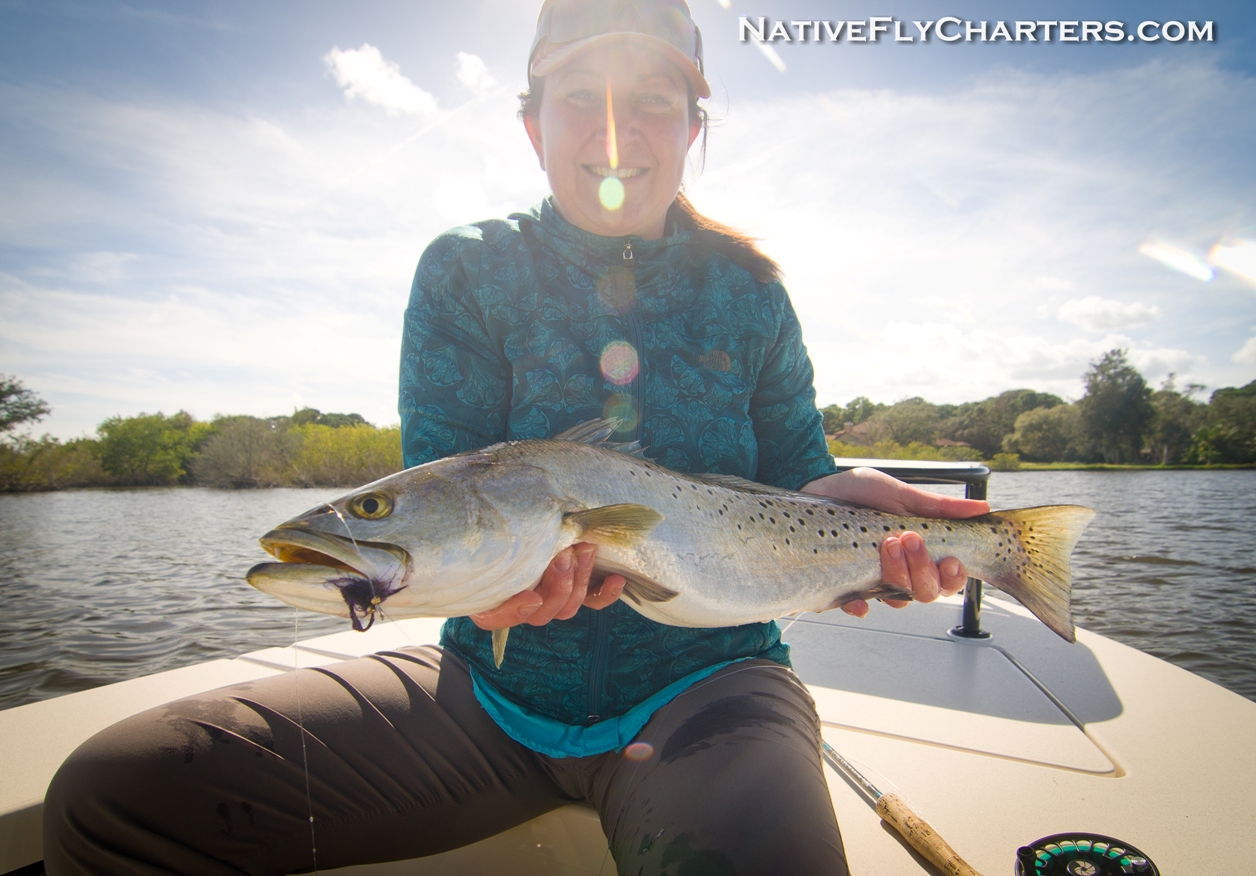 The fish were being so cooperative that we decided to film a little bit of the action:

Fishing was really slow for the 1st half of the trip for Josh and Josh from Orlando, FL. but towards the end of the day, they started whacking them on D.O.A. Shadtails. Colder water temps had the bite starting later in the day when the sun warmed things up. 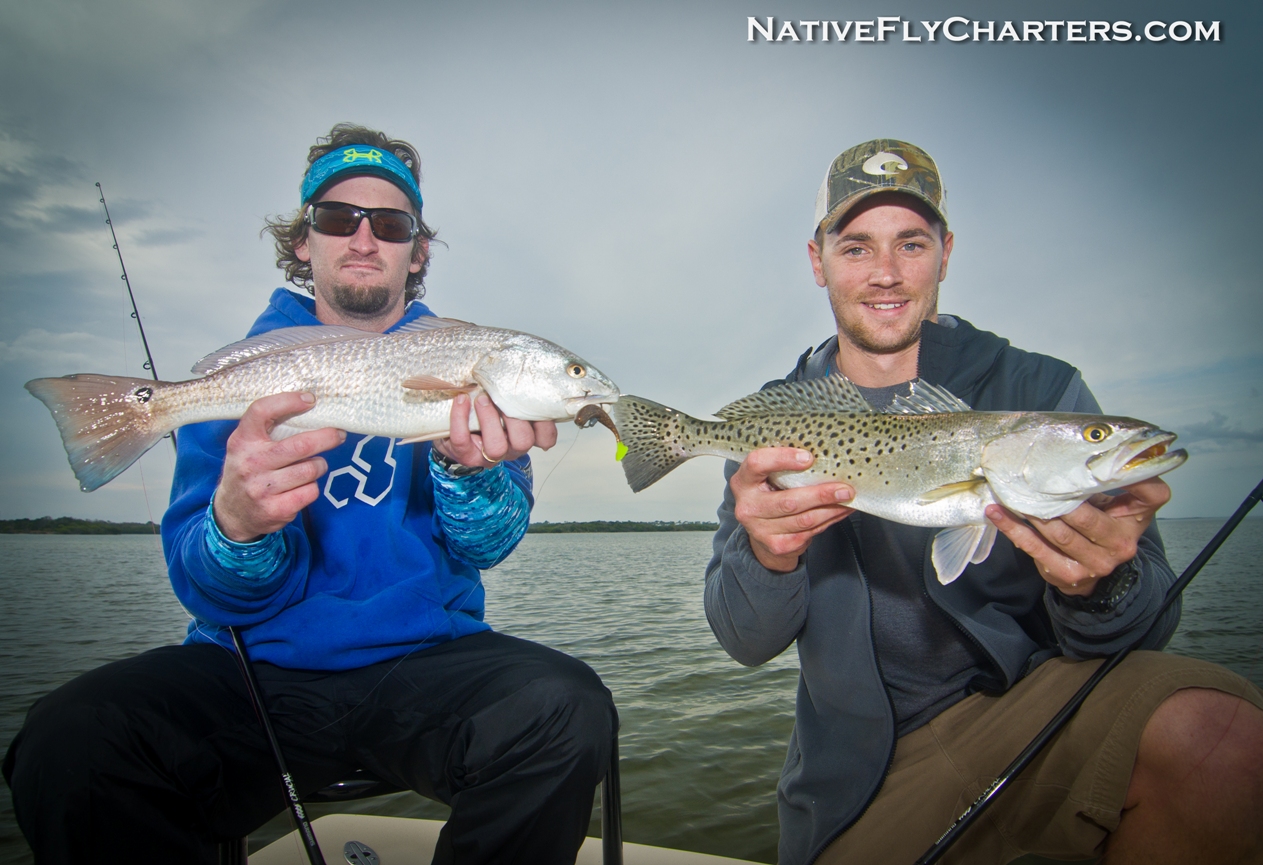 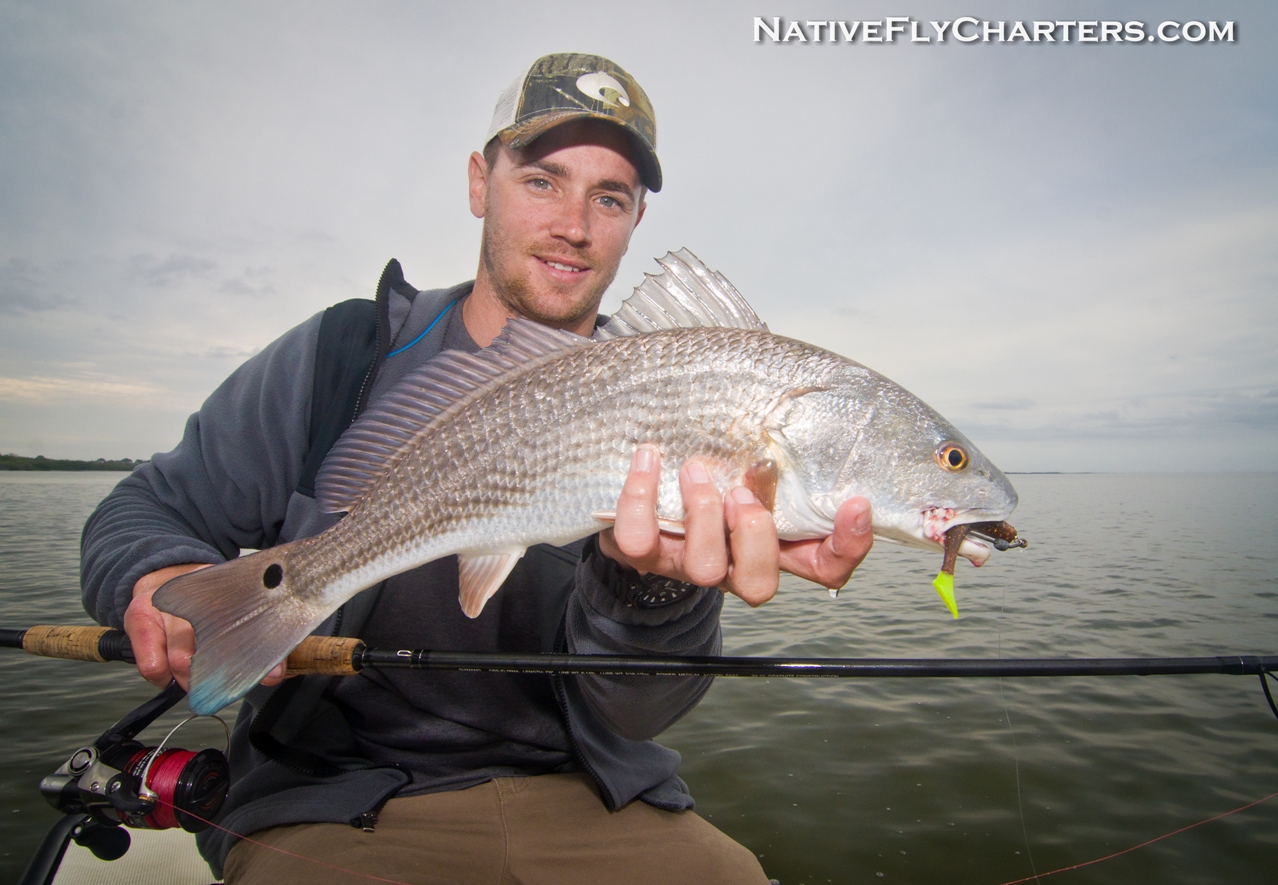 Jason also from Calgary, Canada had to deal with some picky redfish this day. He fed a few but only 1 came boatside. 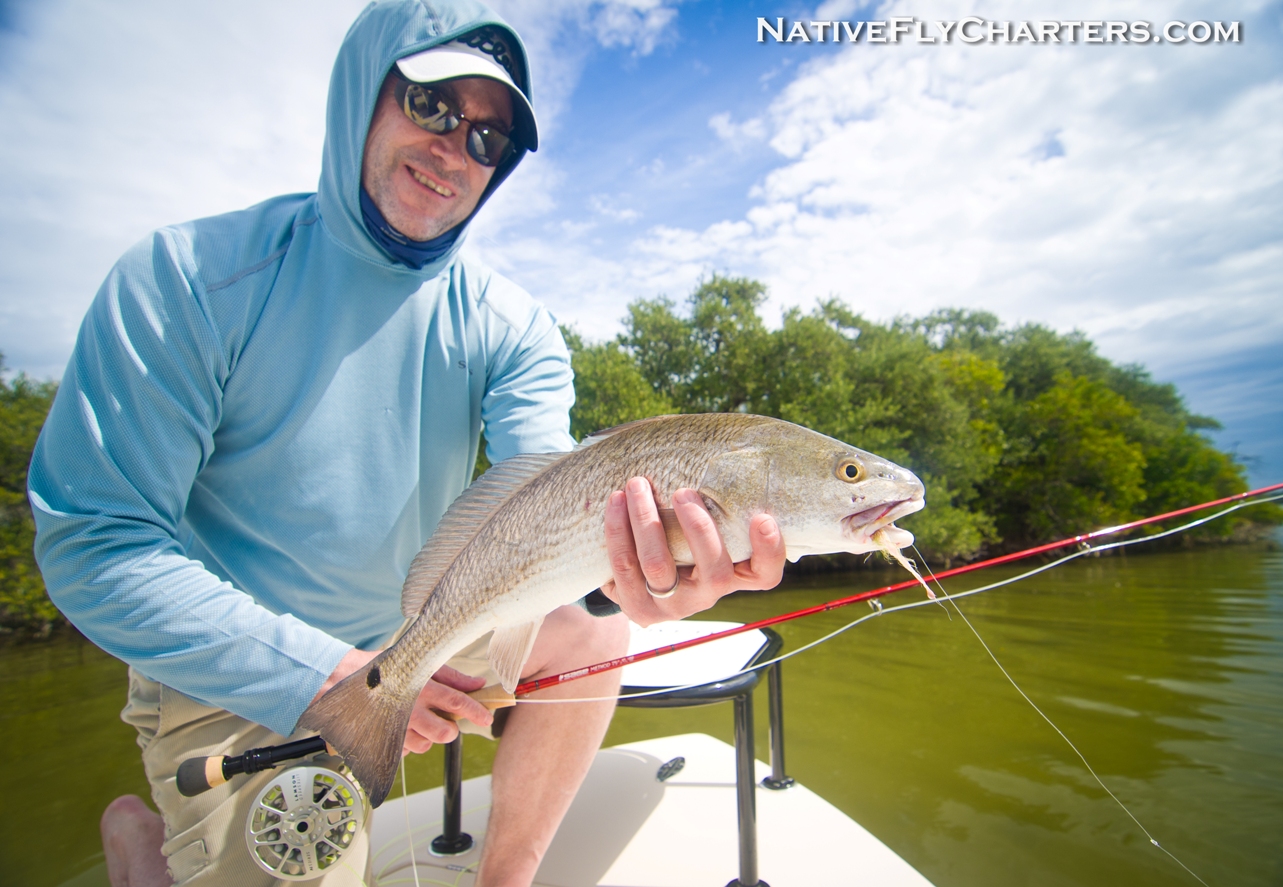 Freshwater anglers Christian and Kevin from Pennsylvania joined me on their first trip in saltwater. They did very well for being the first time. 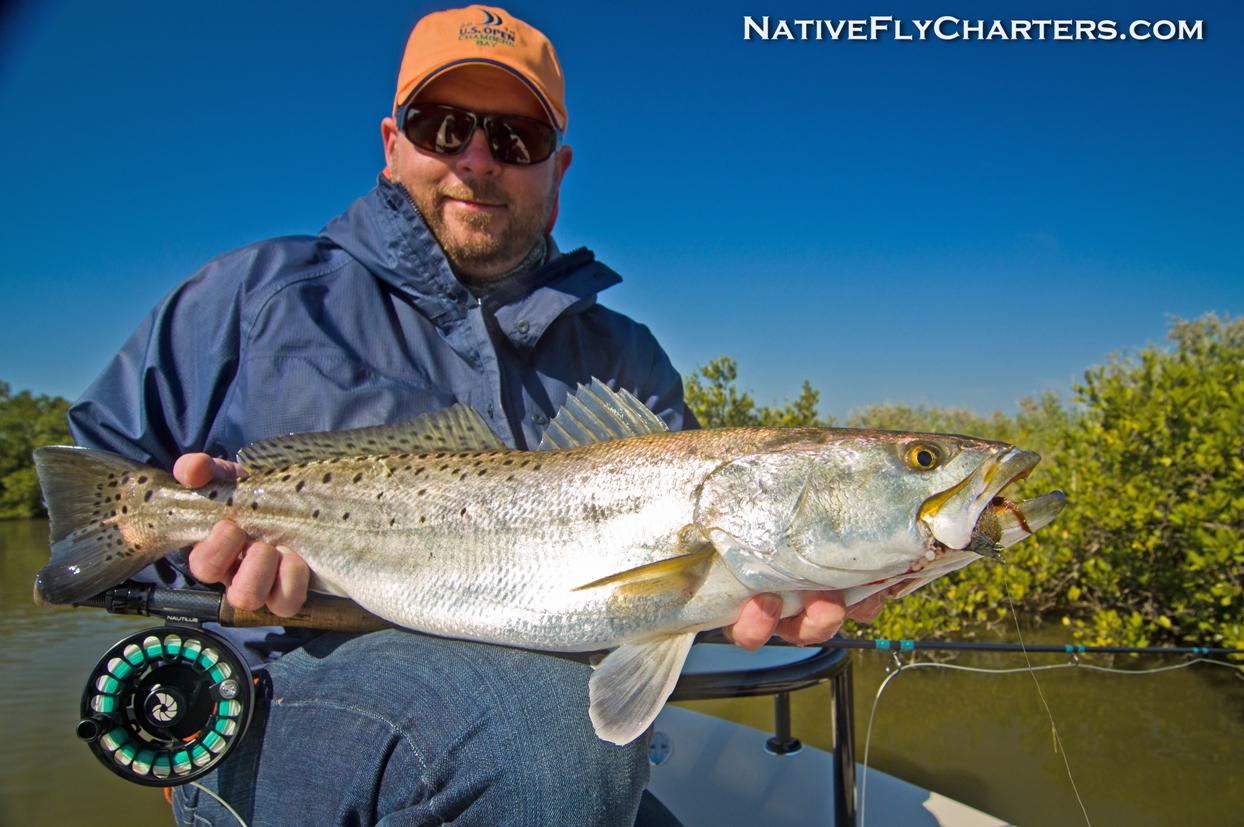 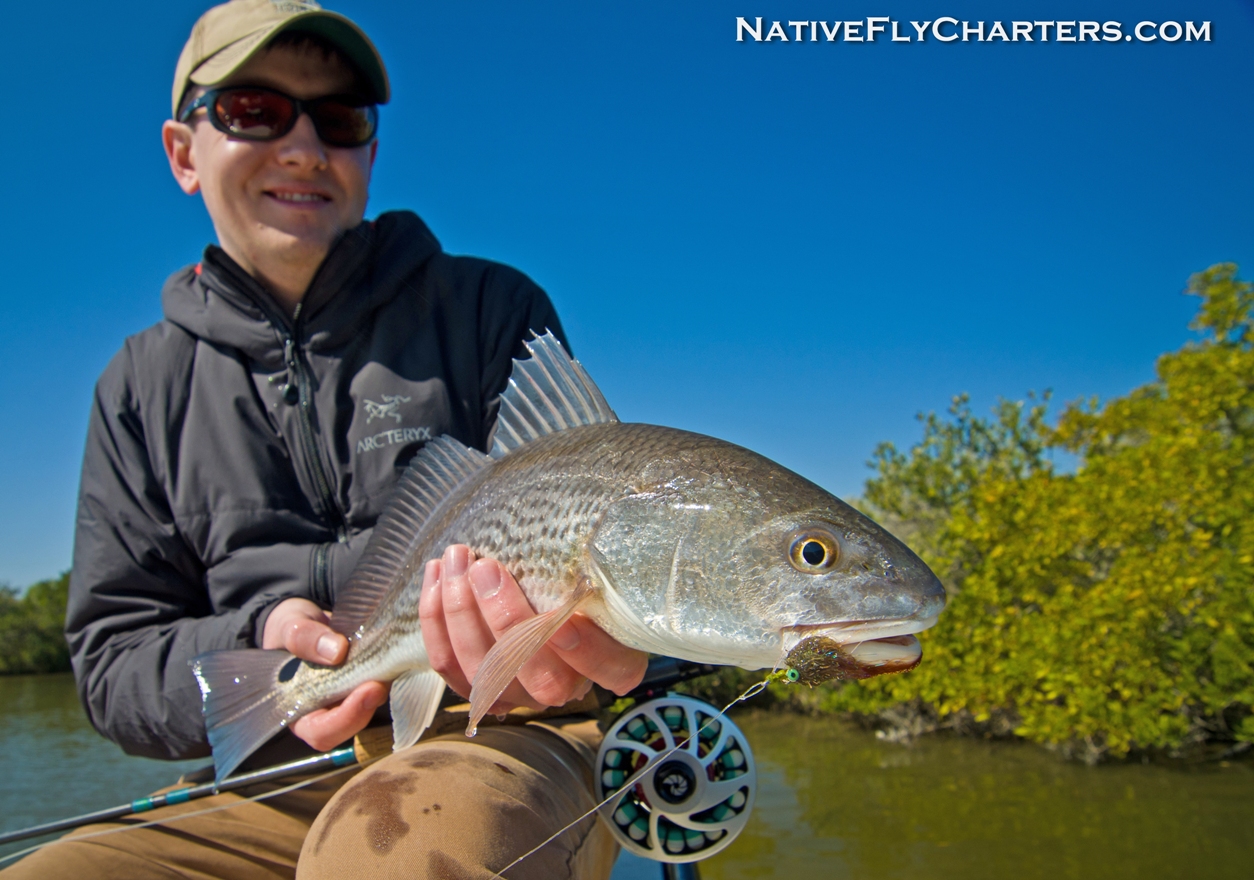 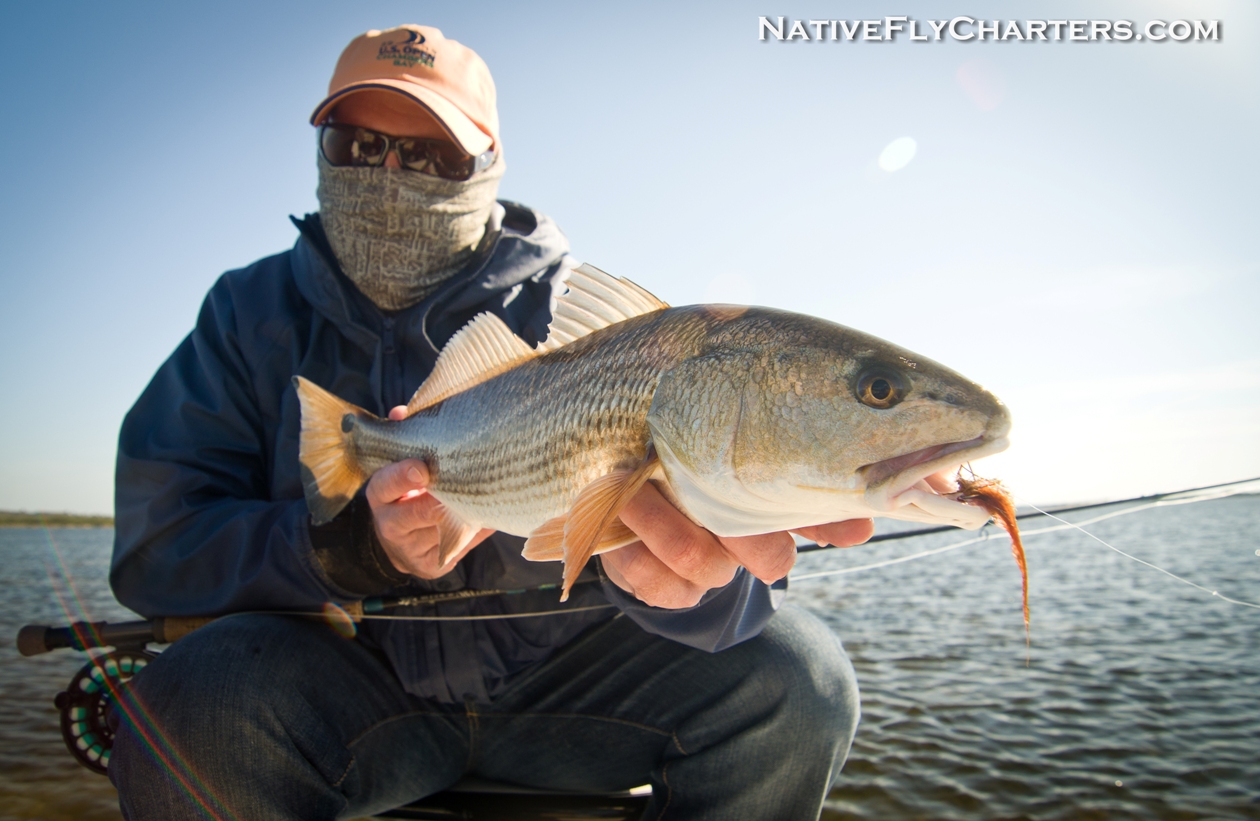 This is a day neither John from Oregon or I will forget. It was the roughest I’ve ever seen the Mosquito Lagoon, some boats could not make it through the channel and had to head back in to the ramp. John and I decided to charge it and head for an area that I have found fish the day before. Luckily my Maverick HPX-V can handle some big waters and we made it to the spots high and dry. John ended up catching his first ever Sea Trout which he was hoping for, and it was a good one! He also got a couple small redfish which was impressive for such a windy day. 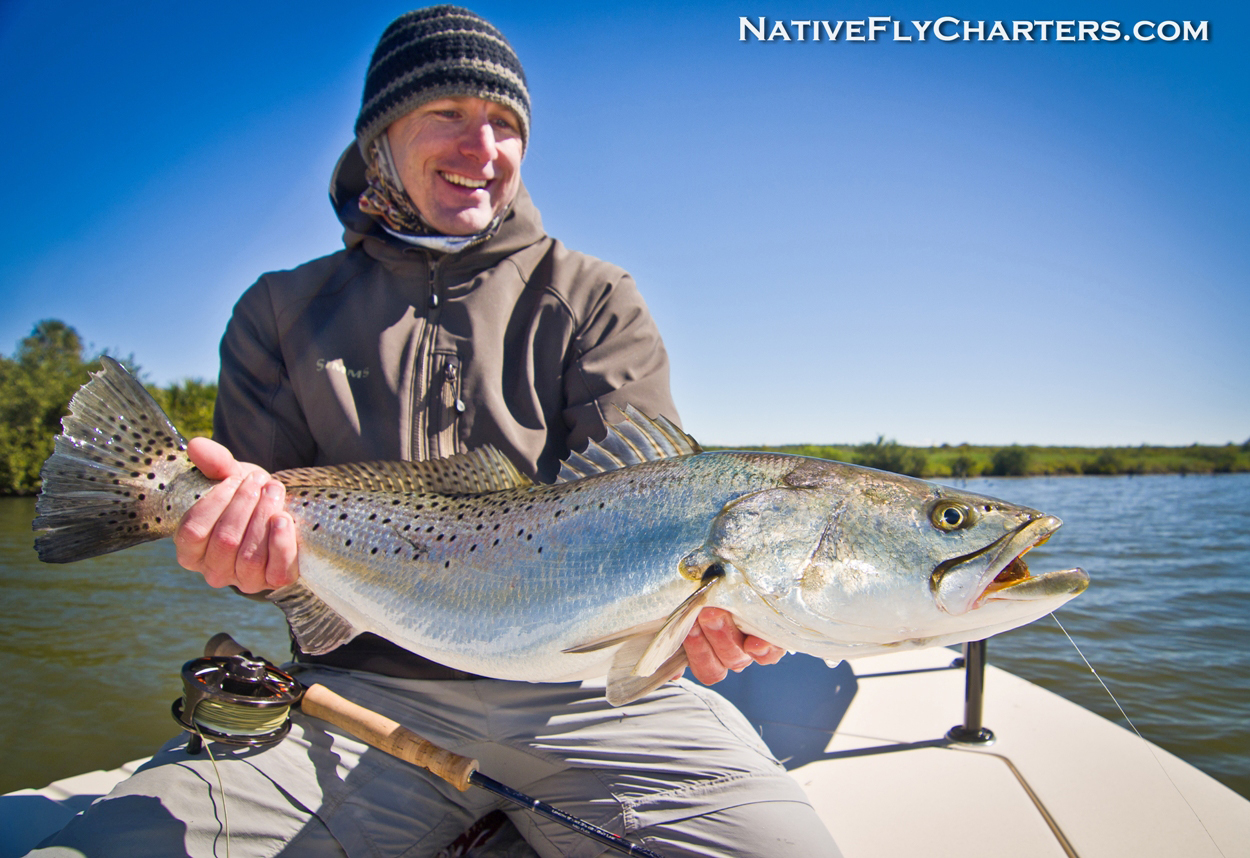 Fun day with regular customer Martin and his buddy Ed from S. Carolina. Redfish, Sea Trout and Mullet, yes mullet caught on artificial lures. (That mullet was really hooked inside the mouth as seen in the pic, not sure if it really ate the lure or if it was just dumb luck to foul hook it in the mouth.) 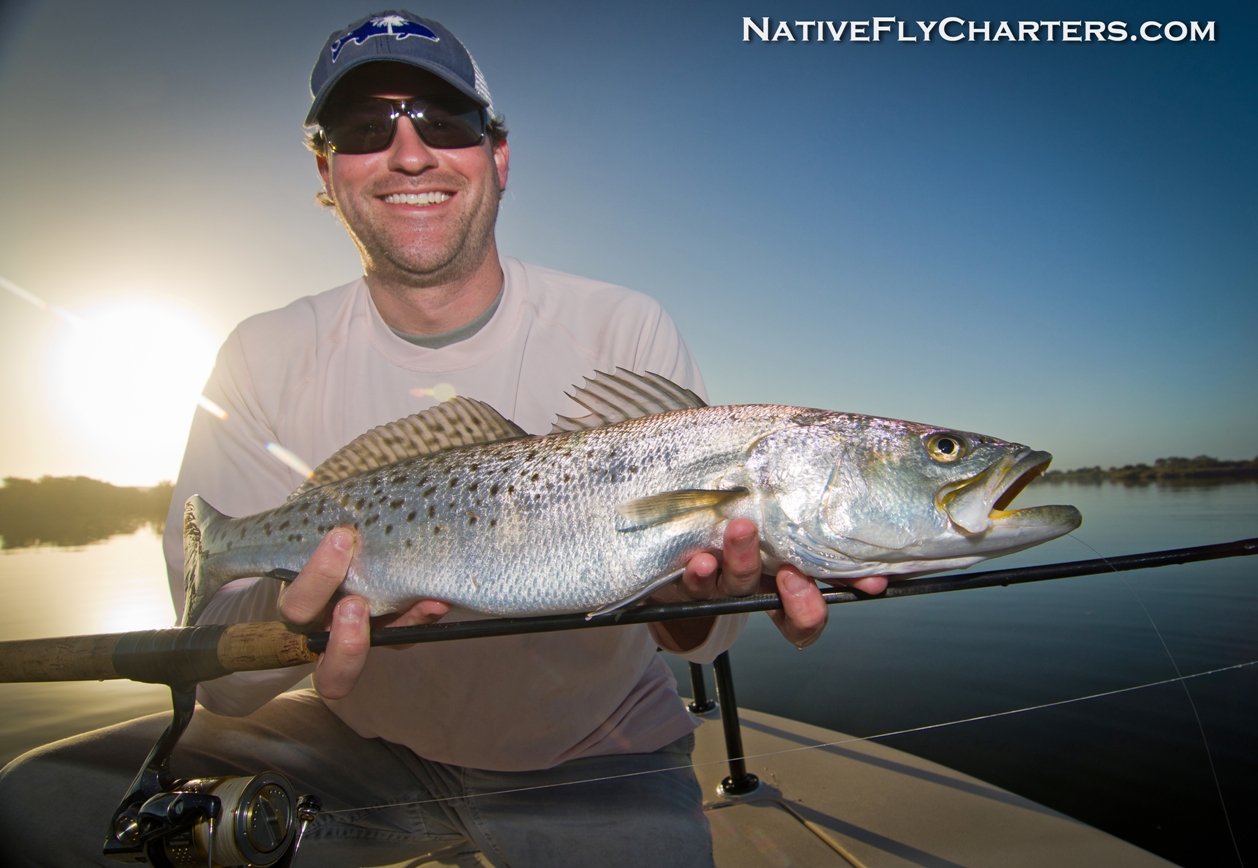 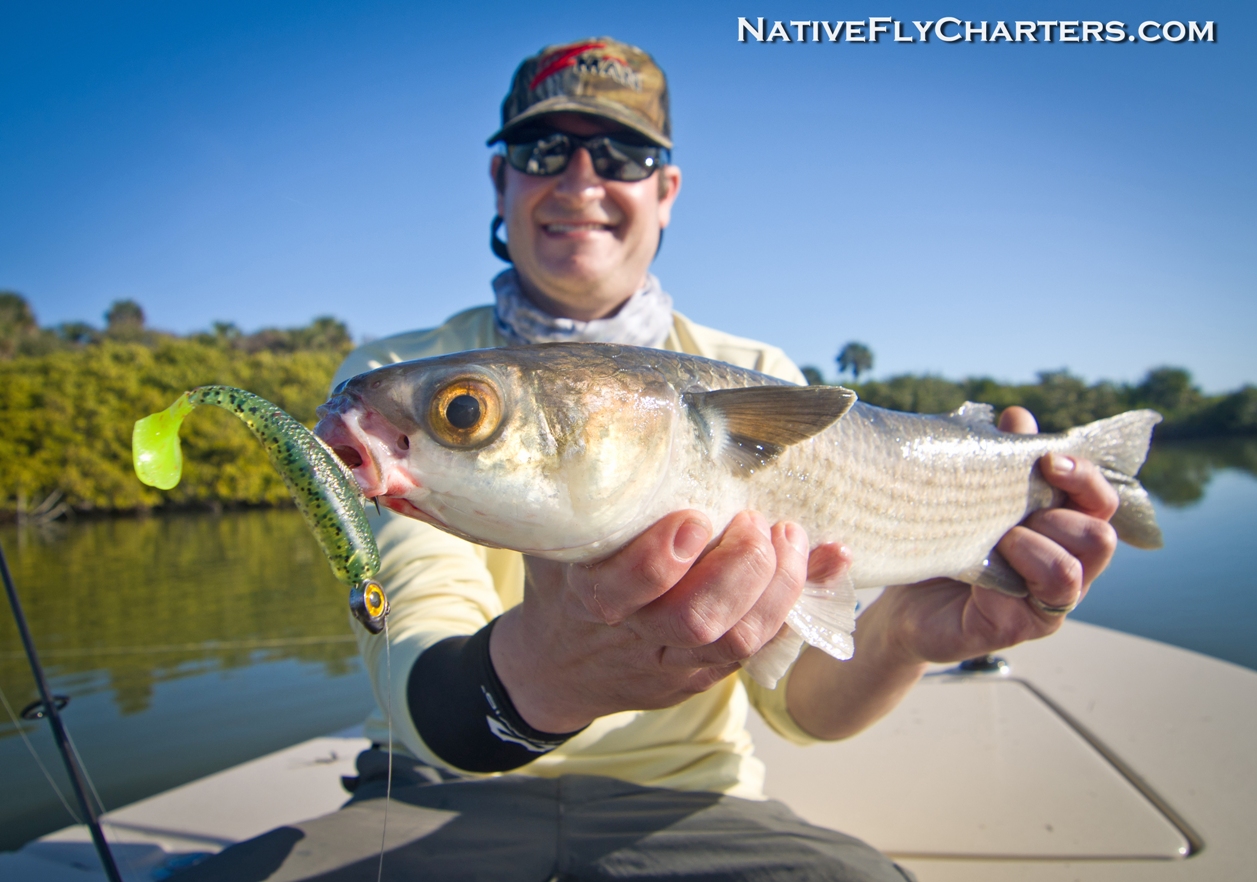 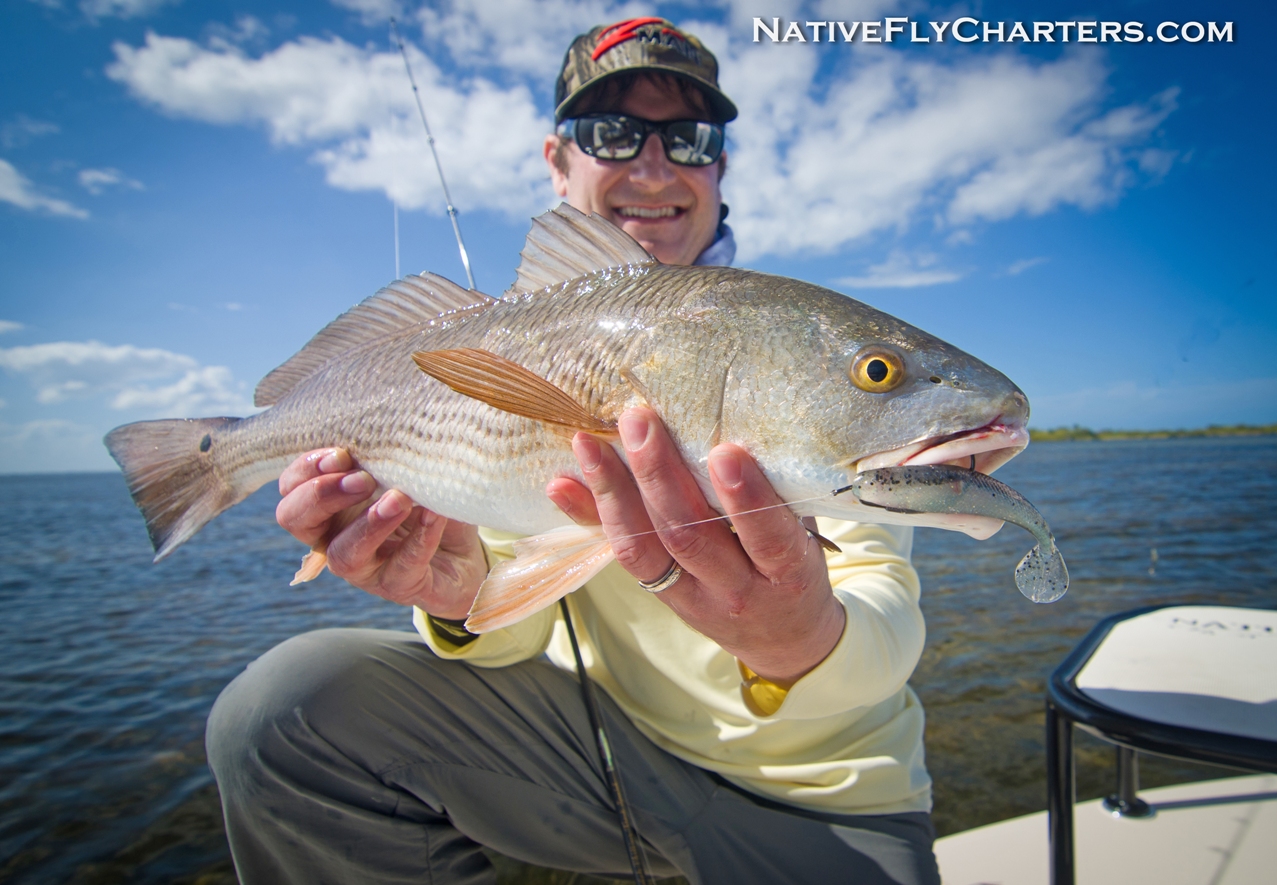 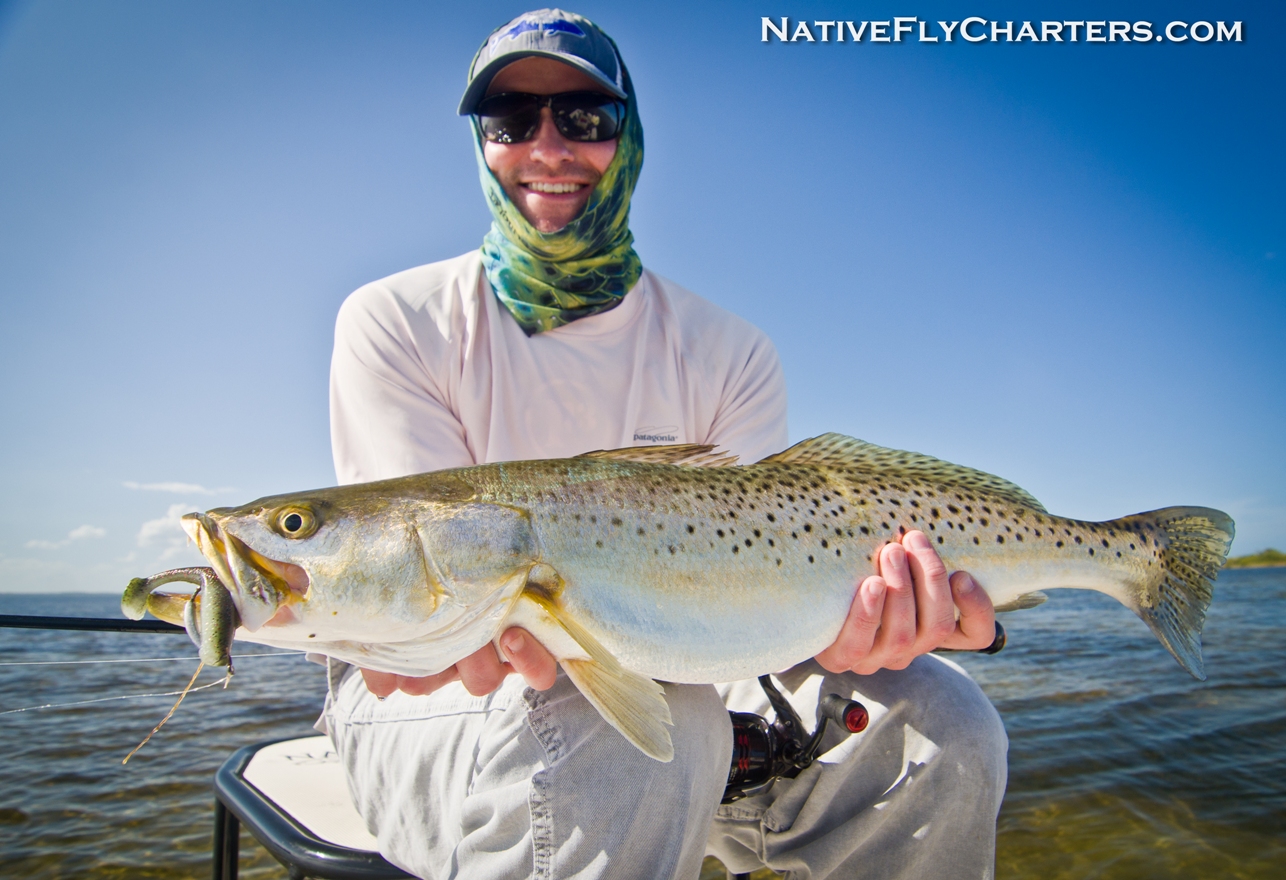 Chip is another regular from Vero Beach, this day he caught his very 1st Black Drum on fly along with another. 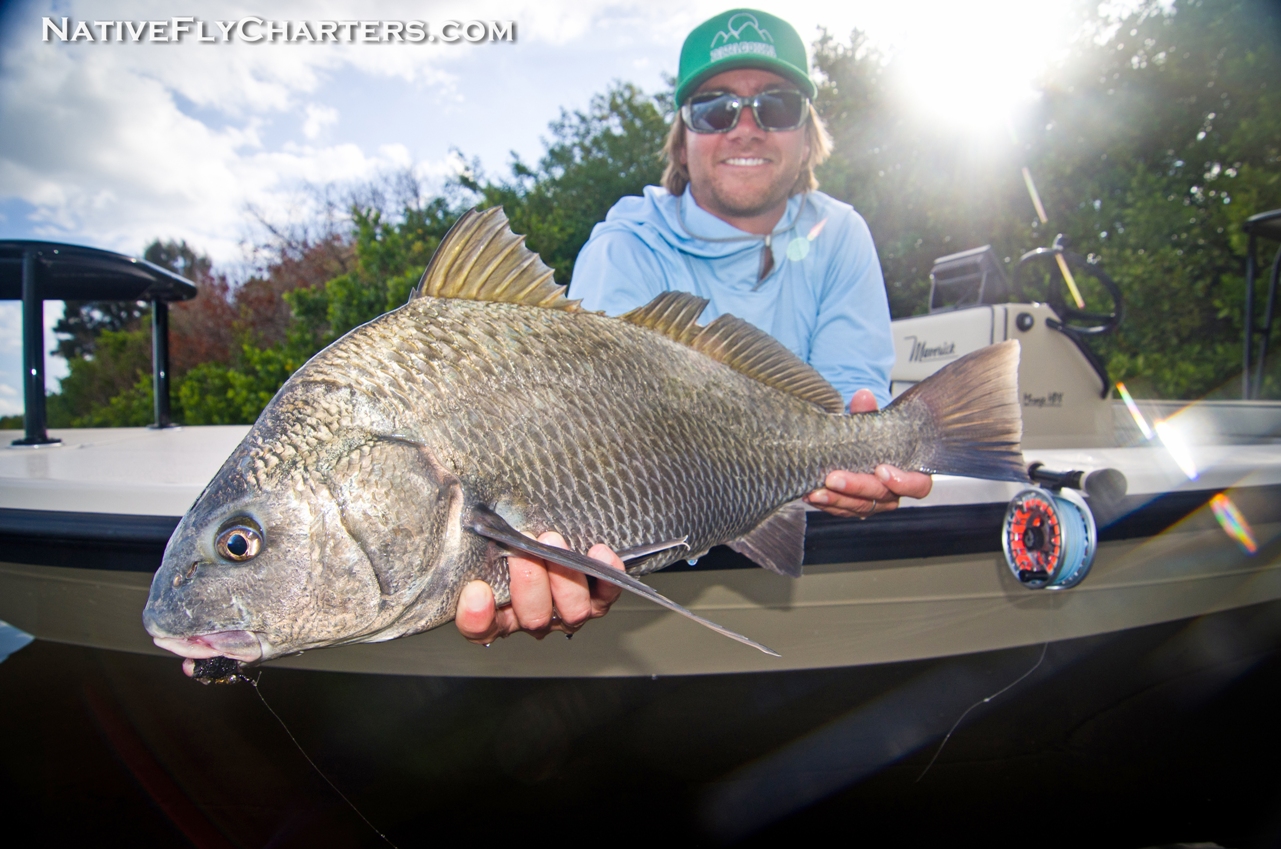 Of course I get to play sometimes. My buddy Billy and I were doing some looking around, when we came across a happy group pf Black Drum. 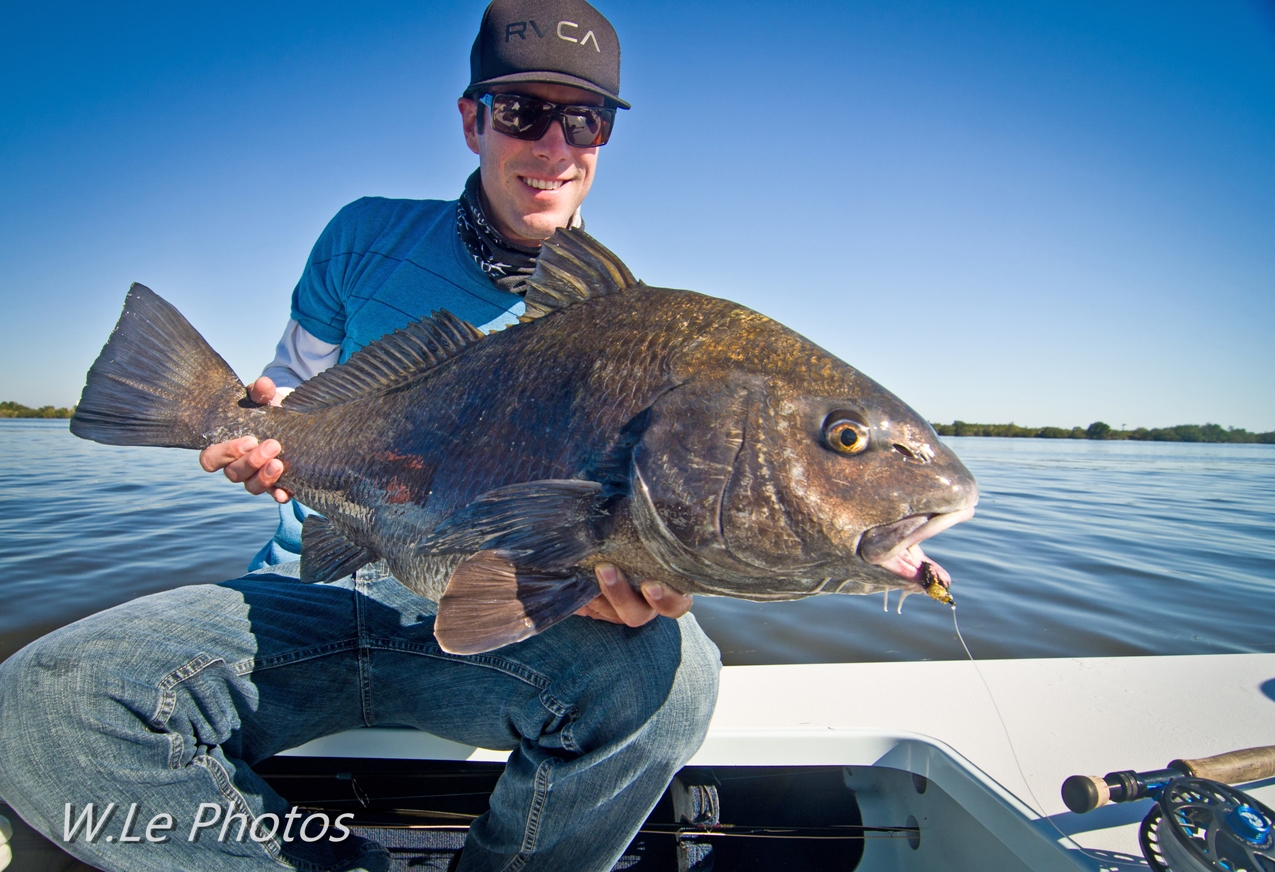 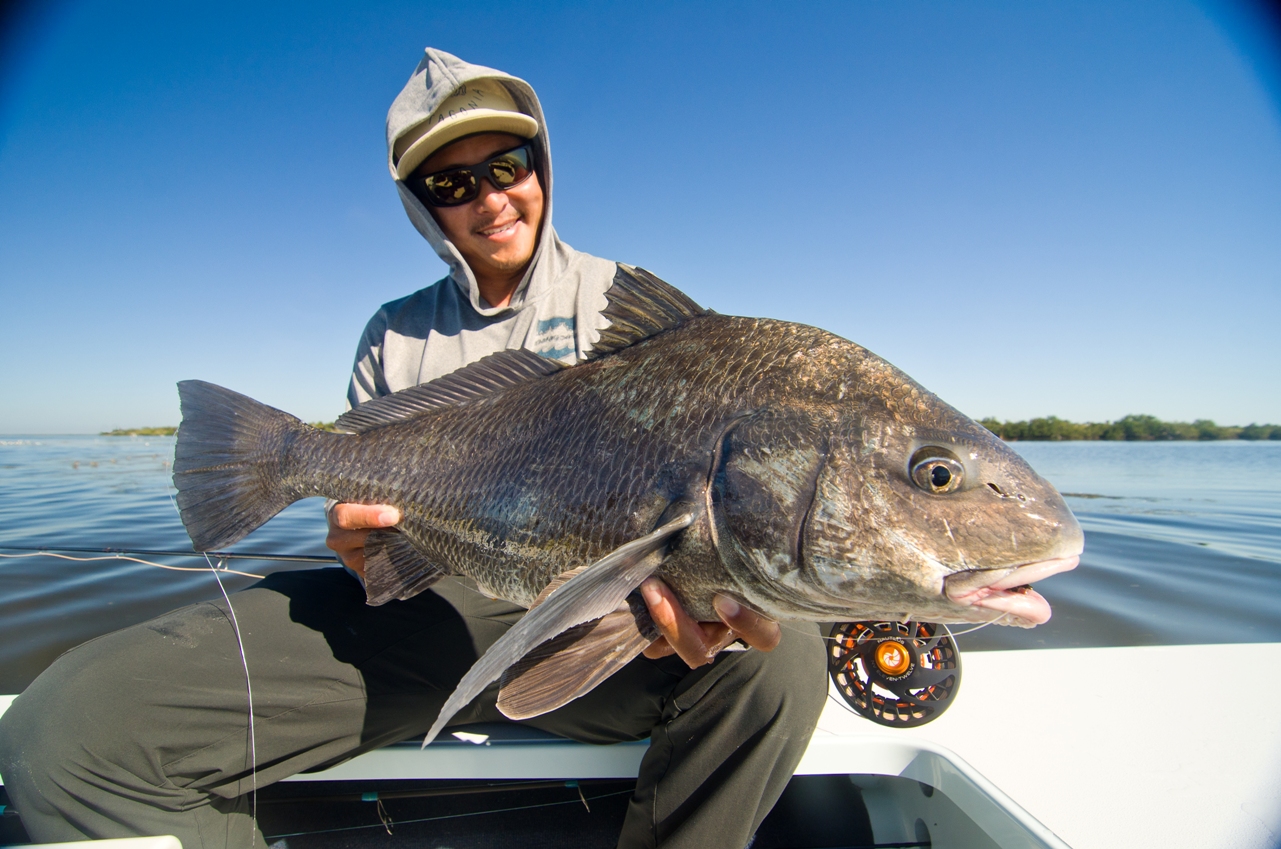 The Black Drum fishing has been very good and still going strong. These fish have been a favorite of mine to specifically target on the fly. I think mainly because they can be very tricky to feed, and sometimes hard to find. I like that challenge and the pursuit.

Thanks for reading and see ya in March!